Items related to In extremis : the life of Laura Riding

Baker, Deborah In extremis : the life of Laura Riding

In extremis : the life of Laura Riding 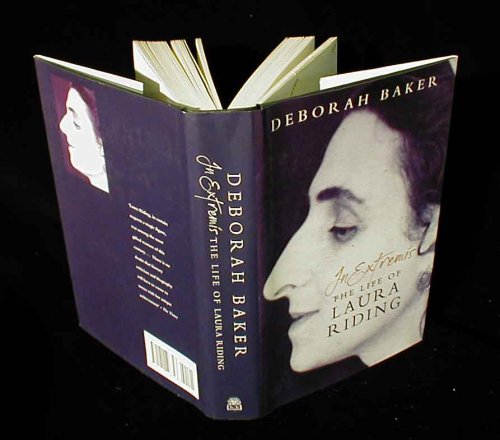 Previous owner's initials in ink on the front free endpaper.

In her poetry, fiction, essays, and public statements, Laura Riding, the author of twenty-three books, tackled feminism, communism, sexuality, Freud, language and belief, and the coming-of-age of the American dream. In her personal relationships she was often at the center of a circle of friends and artists whose activities she inspired and sometimes controlled. Her extraordinary range of associates included writers as diverse as Hart Crane, Gertrude Stein, Edmund Wilson, Malcolm Cowley, Allen Tate, and Robert Penn Warren. During a long and "scandalous" affair with Robert Graves, she watched over his most productive period and guided much of his best work. Together they launched the New Criticism. Laura Riding, who died in 1991 at the age of ninety, was a deeply divided woman whose ability to create a personal mythology and continually reimagine herself could be both astonishing and maddening. The frequent subject of outrageous rumor and intense controversy, she has been portrayed as a megalomaniac, a sexual libertine, a femme fatale, even a witch. In this biography, Deborah Baker considers Laura Riding in the context of her background, her times, and, most importantly, her work. She removes the layers of conjecture, bias, and sometimes sheer nonsense that have distorted Riding's life, reputation, and scale of achievement.

Deborah Baker was born in Virginia and educated at the University of Virginia and Cambridge University. She is married to the novelist Amitav Ghosh. Together with their two children they live in Brooklyn.

1. In Extremis : The Life of Laura Riding

Book Description 1993. Hardcover. Condition: New. Dust Jacket Condition: New. Hamish Hamilton, 1993. First edition edition-first printing(10 9 8 7 6 5 4 3 2 1) Hardcover.black cloth gilt titles dj, has a "Damaged stamp" to extreme bottom pages edge as 1 page has a crease but this is A BRAND NEW BOOK UNUSED. Full refund if not satisfied. 24 hour despatch. If not pictured in this listing, a scan of the actual book is available on request. Seller Inventory # cb419

Shipping: US$ 7.30
From United Kingdom to U.S.A.
Destination, rates & speeds

2. In extremis : the life of Laura Riding Baker, Deborah

3. In extremis : the life of Laura Riding Baker, Deborah