Items related to Regarding The Pain Of Others

Sontag, Susan Regarding The Pain Of Others 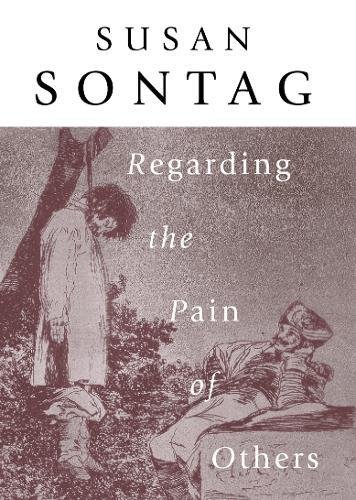 Twenty-five years after her classic On Photography, Susan Sontag returns to the subject of visual representations of war and violence in our culture today.

How does the spectacle of the sufferings of others (via television or newsprint) affect us? Are viewers inured--or incited--to violence by the depiction of cruelty? In Regarding the Pain of Others, Susan Sontag takes a fresh look at the representation of atrocity--from Goya's The Disasters of War to photographs of the American Civil War, lynchings of blacks in the South, and the Nazi death camps, to contemporary horrific images of Bosnia, Sierra Leone, Rwanda, Israel and Palestine, and New York City on September 11, 2001.

In Regarding the Pain of Others Susan Sontag once again changes the way we think about the uses and meanings of images in our world, and offers an important reflection about how war itself is waged (and understood) in our time.

About the Author:
Susan Sontag is the author of four novels, The Benefactor, Death Kit, The Volcano Lover, and In America, which won the 2000 National Book Award for fiction; a collection of stories, I, etcetera; several plays, including Alice in Bed; and five works of nonfiction, among them Against Interpretation and On Photography, which won the National Book Critics Circle Award for criticism. Her books are translated into thirty-two languages. In 2001, she was awarded the Jerusalem Prize for the body of her work, and she received the Prince of Asturias Prize for Literature in 2003.
From Publishers Weekly:
Twenty-six years after the publication of her influential collection of essays On Photography (1977), Sontag (In America) reconsiders ideas that are "now fast approaching the status of platitudes," especially the view that our capacity to respond to images of war and atrocity is being dulled by "the relentless diffusion of vulgar and appalling images" in our rapaciously media-driven culture. Sontag opens by describing Virginia Woolf's essay on the roots of war, "Three Guineas," in which Woolf described a set of gruesome photographs of mutilated bodies and buildings destroyed during the Spanish Civil War. Woolf wondered if there truly can be a "we" between man and woman in matters of war. Sontag sets out to reopen and enlarge the question. "No `we' should be taken for granted when the subject is looking at other people's pain," she writes. The "we" that Sontag has come to be much more aware of in the decades since On Photography is the world of the rich. She has come to doubt her youthful contention that repeated exposure to images of suffering necessarily shrivels sympathy, and she doubts even more the radical yet influential spin that others put on this critique-that reality itself has become a spectacle. "To speak of reality becoming a spectacle... universalizes the viewing habits of a small, educated population living in the rich part of the world...." Sontag reminds us that sincerity can turn a mere spectator into a witness, and that it is the heart rather than fancy rhetoric that can lead the mind to understanding.
Copyright 2003 Reed Business Information, Inc.

Book Description Hardcover. Condition: GOOD. Spine creases, wear to binding and pages from reading. May contain limited notes, underlining or highlighting that does affect the text. Possible ex library copy, will have the markings and stickers associated from the library. Accessories such as CD, codes, toys, may not be included. Seller Inventory # 3652043154

Book Description Hardcover. Condition: Good. No Jacket. Item is in good condition. Some moderate creases and wear. This item may not come with CDs or additional parts including access codes for textbooks. This may not have a dust jacket. Might be an ex-library copy and contain writing/highlighting. Photos are stock pictures and not of the actual item. Seller Inventory # DS-0241142075-3

Book Description Hardcover. Condition: Good. A tan to the pages Good condition is defined as: a copy that has been read but remains in clean condition. All of the pages are intact and the cover is intact and the spine may show signs of wear. The book may have minor markings which are not specifically mentioned. Most items will be dispatched the same or the next working day. Seller Inventory # wbb0022761105

Book Description Condition: Very good. First. In this reappraisal of the intersection of information, news, art and politics in the contemporary depiction of war and disaster, Susan Sontag, one of the most respected writers in the US, cuts through circular arguments about the role of imagery in contemporary Western culture. Seller Inventory # 1367

Shipping: US$ 14.46
From United Kingdom to U.S.A.
Destination, rates & speeds

Book Description 20 x13cm, 117pp, very good+ hardback & dustwrapper Sontag writes about the uses & meanings of images, but about the nature of war, the limirts of sympathy and the obligations of conscience. Seller Inventory # 169609