Items related to Gaza in Crisis: Reflections on Israel's War Against...

Chomsky, Noam Gaza in Crisis: Reflections on Israel's War Against the Palestinians

Gaza in Crisis: Reflections on Israel's War Against the Palestinians 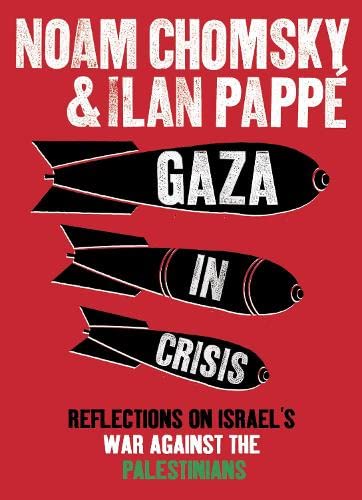 From the targeting of schools and hospitals, to the indiscriminate use of white phosphorus, Israel's conduct in 'Operation Cast Lead' has rattled even some of its most strident supporters. In this book, Noam Chomsky and Ilan Pappe survey the fallout from that devastation, and place the massacre in Gaza in the context of Israel's long-standing war against the Palestinians. "Gaza in Crisis" is a rigorous, historically informed and much-needed analysis of the situation and will be welcomed by all those eager for Chomsky's insights into yet another political catastrophe.

Noam Chomsky is the bestselling author of over 100 influential political books, including Hegemony or Survival, Imperial Ambitions, Failed States, Interventions, What We Say Goes, Hopes and Prospects, Making the Future, On Anarchism, Masters of Mankind and Who Rules the World. He has also been the subject of numerous books of biography and interviews and has collaborated with journalists on books such as Perilous Power, Gaza in Crisis, and On Palestine.Noam Chomsky is Institute Professor (emeritus) in the Department of Linguistics and Philosophy at the Massachusetts Institute of Technology and Laureate Professor of Linguistics and Agnese Nelms Haury Chair in the Program in Environment and Social Justice at the University of Arizona.

Although much of the material collected here precedes Israel's recent military attack on a Gaza-bound international flotilla of embargo-breaking humanitarian aid, this succinct and eye-opening collection of recent interviews and essays from the renowned linguist and activist Chomsky (Hopes and Prospects) and prominent Israeli historian Pappé (The Ethnic Cleansing of Palestine) gives essential context to the crisis. The reader will find Chomsky's consistent positions on everything from the origins of the Israeli-Palestinian conflict to the issue of a one- versus two-state settlement. Pappé adds vital and unexpected historical background, including a chapter on the deep American evangelical roots in the support of Zionism and the birth of modern Arab nationalism in Palestine. Pappé and Chomsky are not perfectly in synch on every point: Chomsky remains skeptical of an academic boycott of Israel, for instance, called for in the past by Pappé and others. But the fundamentals of the crisis--and its scale in humanitarian, moral and political terms--are clear, as well as clearly expressed, between them. This sober and unflinching analysis should be read and reckoned with by anyone concerned with practicable change in the long-suffering region. (Nov.) (c)
Copyright © Reed Business Information, a division of Reed Elsevier Inc. All rights reserved.

1. Gaza in Crisis: Reflections on Israel's War Against the Palestinians

2. Gaza in Crisis: Reflections on Israel's War Against the Palestinians