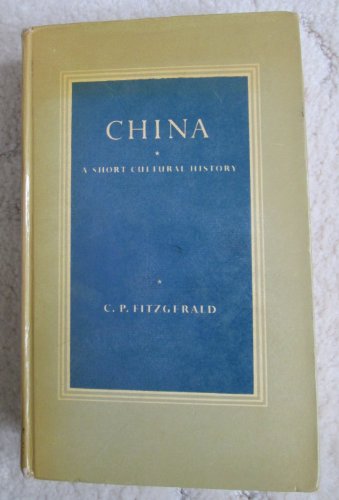 Book Description Barrie & Jenkins, 1976. Condition: Good. Revised. Former Library book. Shows some signs of wear, and may have some markings on the inside. Seller Inventory # GRP78024694

Book Description Barrie and Jenkins, London, fourth edition, revised, 1976, 1976. Cloth, 8vo, 23 cm, xviii, [ii], 624 pp, ills, plates. "This book, which is intended for the reader who has not made a special study of Chinese culture, traces the history of Chinese civilization from prehistoric times down to the latter part of the nineteenth century. The book is divided into seven parts, each covering a major epoch of Chinese history. While the political and dynastic history is given only in outline, omitting detail and avoiding a plethora of unfamiliar names, cultural and economic conditions are treated more fully. In each part there are chapters on art, literature, and religion treating with special attention the most significant developments of the period under discussion. Economic conditions as recorded in Chinese sources arc given full consideration in separate chapters. A special feature has been made of the contacts between China and foreign countries in ancient and mediaeval times. In these chapters Chinese accounts of the Roman Empire, Persia, Byzantium, India, etc., have been quoted in extenso. The book is liberally illustrated with plates and text figures carefully chosen, very largely from private collections, to cover every period of Chinese art. A number of maps assist the reader to whom the geography of the Far East is unfamiliar. Whereas most European historians of China have devoted the larger part of their books to the centuries of Manchu rule in which China came into close touch with Western nations, this book attempts to preserve an equal balance between the early and later epochs. In the last section covering the Manchu dynasty, attention is directed to aspects of the Sino-European contacts which have too often been ignored. The popular literature of the Ming and Manchu periods, which has received very little attention from Western writers, is fully discussed in the light of modern Chinese scholar ship. This Third revised edition contains references to recent archaeological discoveries. " - from the blurb. Rear endpapers a little torn exposing part of hinge, otherwise Very Good in dustwrapper. Seller Inventory # ABE-07394

Shipping: US$ 14.32
From United Kingdom to U.S.A.
Destination, rates & speeds