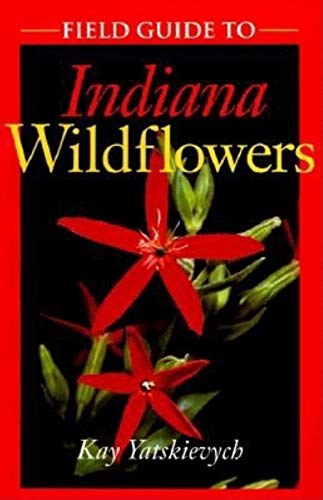 Forty percent or more of Indiana’s wildflowers will not be found in any of the available field guides. Field Guide to Indiana Wildflowers magnificently fills that gap. The book includes all of the herbaceous species―a total of 1,568―recorded in Indiana (except grasses, sedges, and rushes). It contains 640 color photographs, one for every group of visually similar species.
Photographs containing more than one species are accompanied by helpful explanations and numerous drawings of the characteristics that separate each of the individual species.

Each species entry includes the scientific name, common name, habitats, general distribution in the state, months of blooming, size of the plants and the flowers or inflorescence, and a brief additional description of the plant. Photographs or drawings accompany most entries. Flowers that were introduced to the state or are on Indiana’s endangered, threatened, and rare list are marked with a one-word notation indicating their status.

Species are grouped into families, which are arranged so that the most closely related and usually visually similar are in proximity. To assist the reader in identifying unknown wildflowers, a "Flower Finder" section depicts species based on the number of colored parts of the flower and also provides small drawings as visual guides.

With an emphasis on completeness, strong visual presentation, and simplicity of terminology, this book is useful to a broad audience, from the most inexperienced amateur to botanical professionals.

Kay Yatskievych’s love of wildflowers began when she was growing up on a Johnson County, Indiana farm. Since 1990, she has served as co-editor of a 9-volume series, the Flora of the Venezuelan Guayana, published by the Missouri Botanical Garden, while taking photographs and undertaking research for Field Guide to Indiana Wildflowers in her spare time. A founding member of both the Indiana Native Plant and Wildflower Society and the Brown County Spring Wildflower Count, Yatskievych has led dozens of wildflower walks and given numerous slide presentations about plants. Many of her photographs have been published as posters and have been featured in books, magazines, and newspapers.

Kay Yatskievych’s love of wildflowers began when she was growing up on a Johnson County, Indiana farm. Since 1990, she has been employed by the Missouri Botanical Garden as coeditor of a 9-volume series, the Flora of the Venezuelan Guayana, while continuing to do photography and research in her spare time for Field Guide to Indiana Wildflowers. Kay is a founding member of both the Indiana Native Plant and Wildflower Society and the Brown County Spring Wildflower Count. She has led dozens of wildflower walks, given numerous slide shows about plants, and has had many of her photographs published in books, magazines, posters, and newspapers.

"Help is now at hand for Hoosier nature lovers.... The book's complete listings, excellent graphics, and simplicity make it useful for both the professional botanist and the amateur nature lover." ―Indiana Alumni Magazine

"Published just in time to figure out that the so-called weeds you pulled out by their roots are actually Indiana treasures, you can, nevertheless, take solace in learning of their ability to persevere despite human ignorance and perversity." ―NUVO