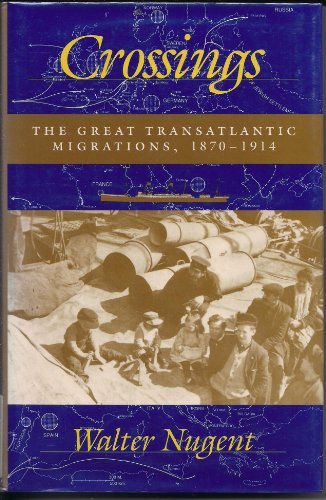 During the period 1870-1914, the Atlantic was a broad highway for migration. Unchecked by government restrictions, wars, or economic depressions, and aided by the new technologies of steamships and railroads, millions of people uprooted their lives and set off for new lands. Americans understand this story as a great saga of immigrants and assimilation of people drawn to the United States as to the promised land of opportunity. But what lay behind this great migration? And how unique was the American experience? To answer these questions, Walter Nugent looks at this massive movement of people from both sides of the Atlantic. Tracing the migrations of more than a dozen national groups from Europe to the four major New World receiving countries - Argentina, Brazil, Canada, and the United States - Nugent discovers a complex story of crossings and recrossings, of tens of millions of human experiences and decisions. Nugent follows the migrants who left rural Europe for American mines and factories, but he also compares the experiences of Europeans on the very different frontiers of settlement at the far reaches of the four receiving countries. And he discusses the migration of women, not only wives and mothers within migrating families but also individuals seeking a new life on their own. Nugent asks important questions about American uniqueness in the context of transatlantic migration history and about the validity of widely held theories of development. He finds that the history of the great migrations is more complex and subtle than these theories. His superb synthesis broadens the scope and clarifies the details of a fascinating story of enormous social and demographic change.

A Choice Outstanding Academic Book of 1993

WALTER NUGENT is Andrew V. Tackes Professor of History at the University of Notre Dame.