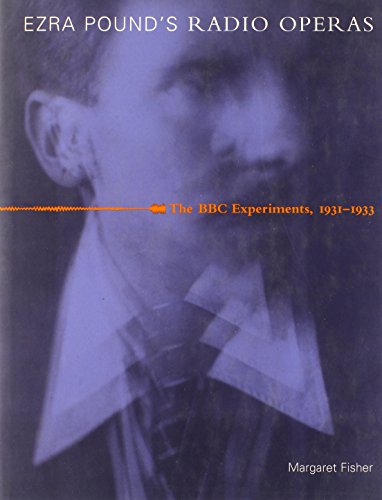 A study of Ezra Pound's experimental BBC radio operas of the 1930s.

Ezra Pound, best known for his Cantos, referred to himself as a "poet and composer" in the 1929 edition of Who's Who. His two BBC radio operas have been obscured by the polemics of his Italian radio broadcasts and his indictment by the United States government for treason during World War II. In this study of Pound's radio operas of the 1930s, Margaret Fisher draws on the unpublished correspondence between Pound and his maverick BBC producer, Edward Archibald Fraser Harding, to reveal a little-known aspect of Pound's career. "Archie" Harding, an advocate of mass microphone access in Britain and the first to produce a global radio linkup, tutored Pound in radio's theoretical and political potential, as well as in specific radio techniques.

Pound's first radio opera, transmitted in October 1931 under the title The Testament of François Villon, was one of the first electronically enhanced operas to be broadcast in Europe. At Harding's request, Pound wrote a second radio opera, Cavalcanti. Although the opera was thought to be unfinished and lost at the time of Pound's death, in 1983 the American composer and conductor Robert Hughes located the various manuscripts and assembled a complete work.

Fisher examines Pound's reasons for composing and his theatrical models. She discusses the sound design of the 1931 production, as well as the context in which Pound wrote his radio operas -- artistic trends in film and radio, various broadcasting organizations and facilities, and contemporary radio techniques. She also compares Pound's radio experiments to those of F. T. Marinetti, Walter Ruttman, and Bertolt Brecht. The book, which contains the 1931 radio script and producer's notes, provides the necessary background and analysis to facilitate a recreation of the 1931 broadcast, a contemporary stage performance, or a film or video production.

Margaret Fisher is an independent choreographer and video director.

This fascinating, meticulously documented study of Pound's two unpublished Radio Operas, The Testament of Francois Villon and Cavalcanti, casts a remarkably wide net. It chronicles Pound's relation to the new medium of radio from his Futurist and Vorticist experiements to the moment of his notorious rome broadcasts, all the while considering the larger relationship between avant-garde intermedia and the new technologies.

(The Chronicle of Higher Education)

Fisher's style makes you feel almost as if she had been there herself.

With great narrative flair, Margaret Fisher tells some fascinating and unfamiliar stories about Pound's career as a dramatist. I find her account of the radio operas as a complement or counterweight to the whole of the Cantos an important contribution to Pound studies: what the Cantos omit -- the melodramatic, the vulgar, the ostentatiously sexy -- the radio operas include. Fisher is herself a stage director, and she re-creates the drama of the BBC broadcast with a remarkable precision of imagination.

This is Pound's other stint on radio. Here the poet-composer collapses old historical quarters into what was the new media of its day. Margaret Fisher's learned book places Pound's radio operas on the backdrop of the European avant-garde, the inner workings of the 'B.B.C.', and Pound's own formidable breadth of ideas, to provide us, for the first time, with comprehensive case studies of modernist radiophonic experimentation.

(Douglas Kahn, University of California, Davis, author of Noise, Water, Meat: A History of Sound in the Arts)

The first scholarly study of Pound and radio, Margaret Fisher's Ezra Pound's Radio Operas marks a quantum jump in our understanding of this important subject. Particularly impressive is her command of the intersections of art and technology. This groundbreaking book places Pound's work within its various contexts: the performance tradition, the works of Villon and Cavalcanti, and technical innovations in the new medium of radio during its formative years, with particular reference to the importance of Pound's collaboration with Edward A.F. Harding of the BBC. Of particular interest are Pound's development of a radio aesthetic with reference to the work of Marinetti on radio, and the uses of radio as a political tool in Germany and Italy.

Book Description PAPERBACK. Condition: New. Book Cover and ISBN may be different from US edition but contents as same US Edition. Excellent Quality,Quick delivery, We may ship the books from Asian regions for inventory purpose. Our courier service is not available at PO BOX. Seller Inventory # nt_9780262062268

5. EZRA POUND'S RADIO OPERAS: THE B