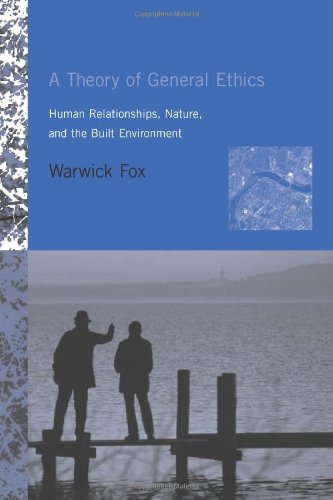 With A Theory of General Ethics Warwick Fox both defines the field of General Ethics and offers the first example of a truly general ethics. Specifically, he develops a single, integrated approach to ethics that encompasses the realms of interhuman ethics, the ethics of the natural environment, and the ethics of the built environment. Thus Fox offers what is in effect the first example of an ethical "Theory of Everything."Fox refers to his own approach to General Ethics as the "theory of responsive cohesion." He argues that the best examples in any domain of interest--from psychology to politics, from conversations to theories--exemplify the quality of responsive cohesion, that is, they hold together by virtue of the mutual responsiveness of the elements that constitute them. Fox argues that the relational quality of responsive cohesion represents the most fundamental value there is. He then develops the theory of responsive cohesion, central features of which include the elaboration of a "theory of contexts" as well as a differentiated model of our obligations in respect of all beings. In doing this, he draws on cutting-edge work in cognitive science in order to develop a powerful distinction between beings who use language and beings that do not.Fox tests his theory against eighteen central problems in General Ethics--including challenges raised by abortion, euthanasia, personal obligations, politics, animal welfare, invasive species, ecological management, architecture, and planning--and shows that it offers sensible and defensible answers to the widest possible range of ethical problems.

Warwick Fox is Reader in Ethics at the Centre for Professional Ethics at the University of Central Lancashire. He is the author of Toward a Transpersonal Ecology: Developing New Foundations for Environmentalism and the editor of Ethics and the Built Environment.

"This book is striking in its originality. It aims at a very ambitious goal: the development of an ethical theory that encompasses the domains of human relationships, nonhuman animals, and the rest of nature, including the built environment. Remarkably, it succeeds in achieving this goal."--Andrew McLaughlin, Professor Emeritus of Philosophy, Lehman College, City University of New York

"[O]ne is unavoidably impressed with the remarkable extent to which [Fox] has succeeded in producing a genuinely original and internally consistent ethical theory from square one...[A] strikingly wide-ranging and novel work, which combines rigorous argument with occasional scholarly bombshells." Piers H.G. Stephens Organization and Environment

"The idea of a general ethical theory is a powerful one that at first appears beyond the scope of any book, let alone one readable by the intelligent layperson. Yet Fox elegantly and lucidly makes a case for just such a system and explains how it may be practically deployed." Michael J. Ostwald Nexus Network Journal

"This book is a knock-out! It is, as the author says, the first of its kind to develop an ethical framework to encompass everything of moral significance in our world. Difficult and complex ideas are explained in an accessible style. This is a truly original work and, I venture to say, will become a classic." Alastair Gunn , Department of Philosophy, University of Waikato, New Zealand

"This is a very ambitious, very original attempt to provide ethical principles of human relations with the natural, the social, and the humanly built worlds. It is written in accessible language, forcefully and carefully argued, and makes a serious and very important contribution to philosophy." Roger S. Gottlieb , author of A Greener Faith: Religious Environmentalism and Our Planet's Future

1. A Theory of General Ethics: Human Relationships, Nature, and the Built Environment