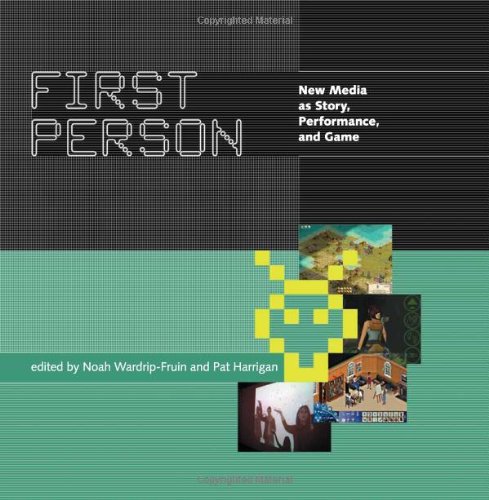 Electronic games have established a huge international market, significantly outselling non-digital games; people spend more money on The Sims than on "Monopoly" or even on "Magic: the Gathering." Yet it is widely believed that the market for electronic literature—predicted by some to be the future of the written word—languishes. Even bestselling author Stephen King achieved disappointing results with his online publication of "Riding the Bullet" and "The Plant."

Isn't it possible, though, that many hugely successful computer games—those that depend on or at least utilize storytelling conventions of narrative, character, and theme—can be seen as examples of electronic literature? And isn't it likely that the truly significant new forms of electronic literature will prove to be (like games) so deeply interactive and procedural that it would be impossible to present them as paper-like "e-books"? The editors of First Person have gathered a remarkably diverse group of new media theorists and practitioners to consider the relationship between "story" and "game," as well as the new kinds of artistic creation (literary, performative, playful) that have become possible in the digital environment.

This landmark collection is organized as a series of discussions among creators and theorists; each section includes three presentations, with each presentation followed by two responses. Topics considered range from "Cyberdrama" to "Ludology" (the study of games), to "The Pixel/The Line" to "Beyond Chat." The conversational structure inspired contributors to revise, update, and expand their presentations as they prepared them for the book, and the panel discussions have overflowed into a First Person web site (created in conjunction with the online journal Electronic Book Review).

Noah Wardrip-Fruin is Assistant Professor in the Computer Science Department at the University of California, Santa Cruz. He is the coeditor of four collections published by the MIT Press: with Nick Montfort, The New Media Reader (2003); with Pat Harrigan, First Person: New Media as Story, Performance, and Game (2003), Second Person: Role-Playing and Story in Games and Playable Media (2007), and Third Person: Authoring and Exploring Vast Narratives (2009). He is the author of Expressive Processing, published by the MIT Press in 2009.

"You have entered the rotunda of a gleaming, new conference center. Above you hangs a banner: 'Welcome to First Person.' In front of you, you see doors leading into separate conference rooms, each of which is marked with a sign in large, Futura Bold letters: 'Cyberdrama,' 'Ludology,' 'Simulation,' 'Hypertext and Interactives,' and so on. You soon discover that every room in this virtual conference called First Person is filled with informed discussion and lively controversy from major figures in the emerging field of Game Studies. Some are arguing that digital games (as the heirs of the novel and of film) constitute the next great arena for storytelling; others respond that games are not narratives at all and require a different theoretical framework and a new discipline. Still others are describing their own exciting contributions to interactive fiction, poetry, or visual/verbal art. By the time you return from this virtual tour of the world of Game Studies, you realize that all of these rooms (and all these topics) are connected in an intricate and compelling architecture of ideas. You begin to understand the rich possibilities that computer games offer . . . as drama, narrative, and simulation. You come to appreciate the great theoretical task that lies before us in exploring both the formal properties and the cultural significance of computer games."
—Jay David Bolter, Wesley Professor of New Media, Georgia Institute of Technology

"First Person makes an invaluable contribution to the current discussion surrounding new media narratives, computer games, and the performative ties that bind them. The anthology brings together major players in the field who discuss their ideas in the appropriately open-ended format of statements and responses, all of which shed light on the aesthetic and social implications of our new experiences of stories."
—Christiane Paul, Adjunct Curator of New Media Arts, Whitney Museum of American Art