Items related to The Ancient Engineers 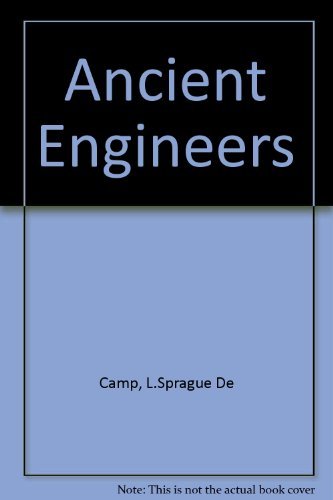 From the dawn of history to the rise of the scientific method in the sixteenth and seventeenth centuries, invention and technology advanced with painful slowness. The reason was not that men were stupid during those thousands of years—it was the fact that most people were simply too busy trying to keep alive. The imagination and daring that leisure and security could divert to other ends were limited to a tiny group. It is about these brave men—whose genius enabled the Egyptians to build their pyramids, the Phoenicians to cross stormy seas, the Romans to erect magnificent public buildings—that this carefully researched and fascinatingly written account of the advance of early technology has been written.

Mr. de Camp describes the methods used by early irrigators, architects, and military engineers to build and maintain structures to serve their rulers' wants. He tells, for example, how the Pharaohs erected obelisks and pyramids, how Nebuchadnezzar fortified Babylon, how Dionysios' ordnance department invented the catapult, how the Chinese built the Great Wall, and how the Romans fashioned their roads, baths, sewers, and aqueducts. He recounts many intriguing anecdotes: an Assyrian king putting up no-parking signs in Nineveh; Plato inventing a water clock with an alarm to signal the start of his classes; Heron of Alexandria designing a coin-operated holy-water fountain; a Chinese emperor composing a poem to be inscribed on a clock invented by one of his civil servants.

The Ancient Engineers will delight students of technology and invention for its accurate portrayal of the foundations of modern engineering as well as lovers of history for its penetrating look at the material background of civilization and its unusual explanations of the world's social evolution.

Review:
A reasonably scholarly but nonetheless accessible history of the great engineering feats of the human race up to the Renaissance, including a great chapter on Oriental architecture, a topic often neglected by such surveys.
From the Inside Flap:
The Pyramids of Giza, the Parthenon of Greece, the Great Wall of China, the Colosseum of Rome . . . Today, we stand in awe before these wonders of the ancient world. They hold our history and the deepest secrets of our past in their hidden recesses.

In THE ANCIENT ENGINEERS, L. Sprague de Camp delves into the heart of the mystery. He introduces us to the master builders who had the vision, the power, and the passion to reach for the clouds and touch the heavens. We share in some of the greatest technological triumphs of all time -- triumphs of the human mind, imagination, and spirit.

Book Description Paperback. Condition: Very Good. Connecting readers with great books since 1972! Used books may not include companion materials, and may have some shelf wear or limited writing. We ship orders daily and Customer Service is our top priority!. Seller Inventory # S_348940331