Items related to Winter In Prague: Documents on Czechoslovak Communism...

Winter In Prague: Documents on Czechoslovak Communism in Crisis 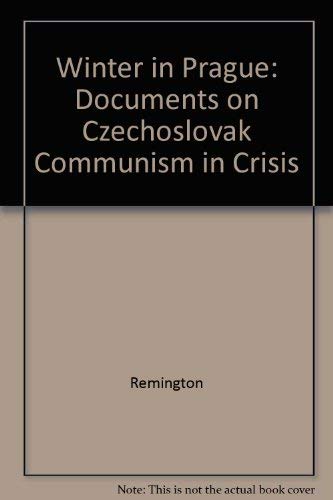 The original sources compiled in this volume, many of which have not previously been available in English, will allow students of communism to examine more closely both the substance of change in Czechoslovakia prior to Soviet intervention in August 1968 and the subsequent disarray in the international Communist movement.

Robin Remington has selected documents to show, first, what was actually happening in Czechoslovakia before invasion. This section includes major statements on such questions as freedom of the press, the role of the Czechoslovak Communist Party, Czech-Slovak constitutional federation, the importance of interest groups within a Communist state, and the controversial Action Program of the new Dubcek government.

The second and third sections of the book group papers on Czechoslovak liberalization and orthodox response. The documents show increasingly concerned Soviet and East European reactions, pressures put on Prague, and negotiations, which, failing, led to invasion.

The book's fourth section deals with the invasion and the split in world communism. It shows post-invasion justification from Moscow combined with deviant reactions from other Communist parties.

The text includes six cartoons from Czechoslovak journals, seventy documents, and thirty-five commentaries by the editor.

Buy Used
this trade pb is in good condition... Learn more about this copy

Winter in Prague : Documents on Czechoslovak Communism in Crisis (Studies in Communism, Revisionism and Revolution)

Winter in Prague: Documents on Czechoslovak Communism in Crisis