Items related to Consciousness, Color, and Content (Representation and... 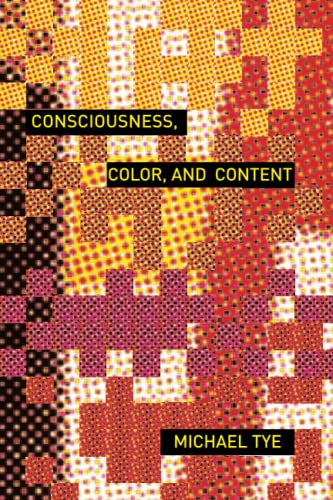 In 1995 Michael Tye proposed a theory of phenomenal consciousness now known as representationalism. This book is, in part, devoted to a further development of that theory along with replies to common objections. Tye's focus is broader than representationalism, however. Two prominent challenges for any reductive theory of consciousness are the explanatory gap and the knowledge argument. In part I of this book, Tye suggests that these challenges are intimately related. The best strategy for dealing with the explanatory gap, he claims, is to consider it a kind of cognitive illusion. Part II of the book is devoted to representationalism. Part III connects representationalism with two more general issues. The first is the nature of color. Tye defends a commonsense, objectivist view of color and argues that such a view is compatible with modern color science. In the final chapter, Tye addresses the question of where on the phylogenetic scale phenomenal consciousness ceases, arguing that consciousness extends beyond the realm of vertebrates to such relatively simple creatures as the honeybee.

Michael Tye is Professor of Philosophy at the University of Texas at Austin. He is the author of Ten Problems of Consciousness (1995), Consciousness, Color, and Content (2000), and Consciousness and Persons (2003), all published by the MIT Press.

A skillful defense of representationalism by one of its leading exponents. Again and again Tye swats the ball back into the court of those who would deny that conscious experience is a matter of how the brain represents the world.

This is a wonderfully articulate and penetrating defense lf the view that phenomenal character is a kind of representational content.

Consciousness, Color, and Content is an important second installment to Tye's representationalist theory of phenomenal consciousness in his influential book Ten Problems of Consciousness. Tye adds valuable clarifications to his earlier account, especially about the notion of content that he uses to elucidate phenomenal character. He vigorously addresses certain persistent objections to representationalism (e.g., inverted qualia, Swampman). He wrestles with familiar recalcitrant challenges to any reductive theory of consciousness (the explanatory gap, the knowledge argument), boldly maintaining that they rest on a cognitive illusion. Against the charge that representationalism's commitment to objectivism about color and other secondary qualities is scientifically dubious, he proposes a novel and sophisticated objectivist account of color. Like Ten Problem of Consciousness, this book belongs on the small shelf of the most significant recent books in the philosophy of mind.

Tye's Consciousness, Color, and Content is a timely and highly welcome contribution to the ongoing debate on consciousness. In depth of treatment and scope of coverage, the book takes the representational view of consciousness to a new level of philosophical illumination and sophistication, helping to consolidate externalist representationalism as a leading approach to qualia and other related issues―indeed, as the only naturalistically acceptable approach that has any promise of success in dispelling 'the mystery of consciousness.'

A splendid book, powerfully argued and written in Tye's characteristically lucid style. Required reading for anyone interested in philosophical theories of consciousness, mental representation, or perception.