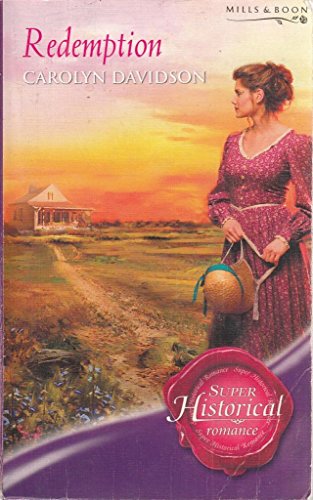 He was a Civil War veteran, wounded in body and soul. And when his wife died unexpectedly, he retreated from life, craving only solitude and his happy memories. But his young son needed a mother's love and guidance -- even if Jake wanted no woman himself. So who better to choose than the town's spinster schoolmarm?

Alicia Merriweather
Wanted so much to love . . .

She had come to warn Jake his son was running wild. But she stayed because beneath his gruff exterior she saw Jake's pain and loneliness. Having borne the brunt of ridicule all her life, tall, plain Alicia understands both all too well. But could Jake ever learn to share his home and his heart?

Jake McPherson is a mean-tempered hermit, and his nine-year-old motherless son, Jason, has run wild for long enough, so schoolteacher Alicia Merriweather decides to intervene. She pushes her way into Jake's house, ignoring his snarls and growls, and ends up taking both McPhersons under her benevolent wing. Davidson's latest historical romance was written in response to the demands of readers enamored with The Wedding Promise (1998), and this continuation is set in 1880 in the same small Kansas town. The hero is a double amputee and the heroine is Junoesque, leading to Davidson's unflinching inquiry into the serious issues of the day, including the difficulties faced by veterans wounded in the Civil War, bereavement and its effect on entire families, blended families, and, in her characters' unwillingness to expose their perceived physical flaws to each other, the boundaries body image imposes. Lynne Welch
Copyright © American Library Association. All rights reserved

"This deftly written novel . . . is a skillful handling of the traditional Western . . . and a moving love story." -- Romantic Times on A Marriage By Chance

Book Description Mills and Boon, 2006. Paperback. Condition: Used; Good. Dispatched, from the UK, within 48 hours of ordering. This book is in good condition but will show signs of previous ownership. Please expect some creasing to the spine and/or minor damage to the cover. Damaged cover. The cover of is slightly damaged for instance a torn or bent corner. Aged book. Tanned pages and age spots, however, this will not interfere with reading. Inscription on the first page, typically just a name but may include a dedication or a brief personal message. Seller Inventory # CHL5122140

Shipping: US$ 2.42
From United Kingdom to U.S.A.
Destination, rates & speeds

Book Description Mills & Boon 01/12/2006, 2006. Condition: Very Good. This book is in very good condition and will be shipped within 24 hours of ordering. The cover may have some limited signs of wear but the pages are clean, intact and the spine remains undamaged. This book has clearly been well maintained and looked after thus far. Money back guarantee if you are not satisfied. See all our books here, order more than 1 book and get discounted shipping. . Seller Inventory # 7719-9780263849615