Items related to Capital: A Critique of Political Economy; The Process...

Capital: A Critique of Political Economy; The Process of Capitalist Production (Classic Reprint) 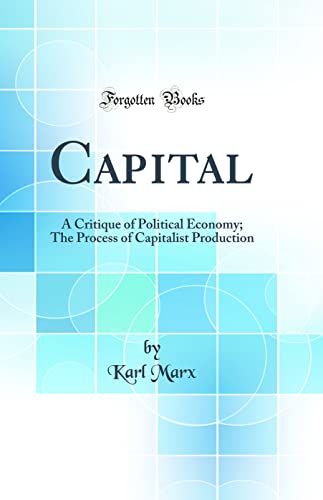 Excerpt from Capital: A Critique of Political Economy; The Process of Capitalist Production

The present volume consists, mainly, of the first nine chap ters of Volume I.,-of Marx's Capitol, which are now, not for the first time, however, reprinted. These chapters have long been recognized to contain the theoretical part of the Marxian system, in so far as it applies to political economy, i.e., the laws of value surplus - value, and money. Former editions being now out of print, or otherwise unobtainable, it is considered desirable to issue the present book, which is in tended to be used as a text - book for economic classes and the like, as being more convenient to the needs of group - stu dents than the bulky volume of Capital, and, particularly in view of the uniform non-success which has attended the numerous attempts to popularize, or simplify Capital, more desirable than these.

The practical application of the theories here expounded must, of course, be studied in the complete work, and in the voluminous post-marxian literature. One thing more: Marx ian economics can be understood only, and should be studied only as forming part of a complete whole - a system - which has been called, not very happily, the Socialist Philosophy. For this reason there has been included the famous 32nd chapter of Capital, and the following extract from the preface to A Contribution to the Critique of Political Economy, is presented as indicating the manner in which Marx himself approached this problem.

Shipping: US$ 32.71
From United Kingdom to U.S.A.
Destination, rates & speeds