Items related to Tonality in Western Culture: A Critical and Historical...

Tonality in Western Culture: A Critical and Historical Perspective 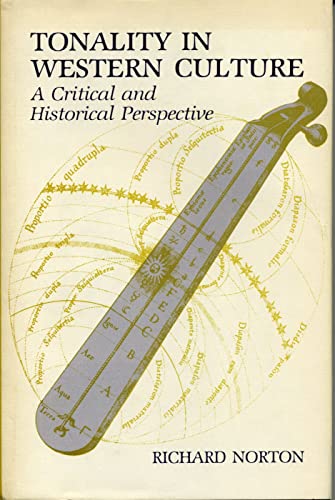 This book initiates "the first critical appraisal of the whole of Western tonal consciousness, from the discoveries of Pythagoras to the latest popular song." While tonality has been unwittingly championed as the product of the bourgeois age in Europe and America from 1600 to 1900, Norton states, key-centered music is understood here merely to exhibit components of an encompassing sonic expressivity as durable as any language. The author analyzes fundamental components of Western tonal phenomena that have persisted in music from ancient Jewish cantillation to the so-called atonal procedures of the Schoenberg school and beyond. Norton isolates the role of traditional music theory in the creation of models that attempted to explain tonality solely in terms of the concretized and limited objectivity of the musical score.

The author evaluates and discards those features of logical positivism, scientific empiricism, idealism, and vitalism that in his view have encumbered virtually all speculation on tonality. With this negation, his aim is to restore the composer as a creator subject to his own sonic object. The book's approach is particularly indebted to the thought of Theodor Adorno, the member of the Frankfurt School of critical theorists that Norton finds most capable of suggesting an authentic dialectic of tonality. The author interprets the activities of both theorists and composers from various periods within the context of their mutual and conflicting historical interests. Ranging through the fields of physics, acoustics, psychology, sociology, economics, and historical musicology and criticism, Norton demonstrates that the cognitive abilities and disabilities of humans as tonal hearers form a necessary ground for understanding the remarkable vitality of tonality as historical process.

Current theories of human tonal activity are hopelessly limited, the book concludes, however self-preserving they have become through the sanction of academic respectability. In short, tonal science, as it is commonly practiced, is not tonal truth. In its place the author urges a thoroughgoing critique of the language and methodology of contemporary tonal speculation, an abandonment of its confining sphere of interest, and a new and liberating approach to tonal consciousness that incorporates all relevant data of human sonic cognition. This approach assumes that tonality is not merely the result of the physical unfolding of natural appearance—the overtone series that so enchanted Rameau, Schenker, Hindemith, and others—and the submission of composers to its assumed authority. Tonality is, rather, Norton contends, a decision made against the chaos of pitch and for the human potential to create works of music that speak with integrity and beauty, that as aesthetic creations neither lag behind nor rush ahead of human enjoyment and understanding.

1. Tonality in Western Culture: A Critical and Historical Perspective