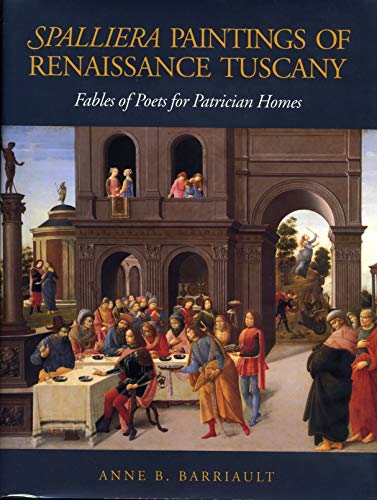 Spalliera Paintings of Renaissance Tuscany defines and characterizes cycles of panel paintings that decorated patrician residences in Tuscany. It takes a fresh approach to the paintings, placing them not only in the context of Renaissance art but also in the context of the society for which they were made. It contributes to our understanding of the formal conventions of the pictures as narrative paintings designed to be seen in specific spaces within bedchambers and studies; their function, integrated with the woodwork and furniture of those spaces; and their social role, often commissioned in honor of weddings to reinforce values of patrimony, civic-mindedness, and familial duty.

Spalliera painting flourished between 1470 and 1520, with artists such as Botticelli, Ghirlandaio, Piero di Cosimo, Pontormo, and Andrea del Sarto translating the histories, poems, and tales of Livy, Ovid, Petrarch, and Boccaccio, among others, into colorful didactic sequences that demonstrate ancient and exemplary standards of conduct. An analysis of the typologies of the heroes and heroines in these paintings, and the meanings that their stories may have had for the patrons who commissioned them, also sheds light on social mores, expectations, and issues of gender in the patrician society of Renaissance Tuscany.

Anne B. Barriault is Senior Editor at the Virginia Museum of Fine Arts, Richmond.

“All Renaissance art was functional and purpose-built for a particular task and a particular place. This book is the first sustained exploration of the spalliera, an important but overlooked type. In a learned and judicious text, the author defines what the type was, discusses its function, explores its iconography, and traces the network of connections between the paintings and the social world from which they arise. This social dimension is one of the most important achievements of the text. Without doubt this book will make a real, and much welcomed, contribution to the history of Renaissance art.”