Items related to The Triumph of Pierrot (The Commedia dell'Arte...

Green, Martin The Triumph of Pierrot (The Commedia dell'Arte and the Modern Imagination)

The Triumph of Pierrot (The Commedia dell'Arte and the Modern Imagination) 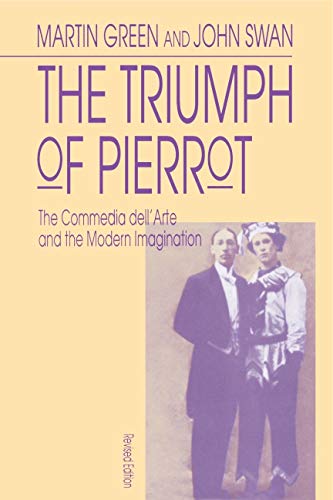 What do Stravinsky, Degas, Chaplin, Isak Dinesen, Meyerhold, Monty Python, and T. S. Eliot have in common? What do such disparate work as Picasso's Family of Saltimbanques," Bergman's "Sawdust and Tinsel," Waugh's "Put Out More Flags," and Pirandello's "Six Characters in Search of an Author" share? As [Green and Swan] persuasively argue in their new book, all have been influenced by the Italian commedia dell-arte. . . . Exaggeration, artifice, and a self-conscious theatricality are commedia's hallmarks; impertinence, mockery, and irony its weapons against the serious threats of the real world. No wonder, then, that commedia (along with the archetypes it supplies) exerted a fierce hold on the modernist imagination, and according to [the authors] left its imprint on virtually every area of Western culture from 1890 to 1930."-Michiko Kakutani in The New York Times"Green and Swan have given us an extraordinary interdisciplinary work. Using Diaghilev's Ballets Russes, the saltimbanque paintings of Picasso and Schoenberg's musical experiments as the starting point, they examine the modernist consciousness, which evolved from the 16th-century concept of the commedia dell'arte character of Pierrot, the original free-spirited revolutionary of European improvisational theater. Green and Swan are sweeping and occasionally breathtaking as they link the masters of modern literary culture to the tragicomic, grotesque traditions of the Harlequin: in literature, Rilke, Kafka, Brecht, and Weill; in art, Chagall and Rouault; in music, Stravinsky and Ravel; in film, Keaton, Chaplin, and the German expressionist montage of Lang and Wiene. From commedia to Caligari, the theme of this enormously provocative book is revolt and the modern spirit. . . . an intellectual tour de force."-Choice

Martin Green is Professor of English at Tufts University.

Why did modernists such as Picasso and Stravinsky ransack the commedia dell'arte, a lowbrow popular entertainment form of the 16th century, for images of harlequins, acrobats and clowns? While London music halls kept alive the commedia's rowdy spirit, 20th century painters, poets, composers and filmmakers drew on the medieval Italian spectacle for inspiration to challenge society's "respectable" values. Green (Children of the Sun and Swan, an Indiana librarian, track down images of Pierrot, Columbine and Harlequin, or traces of their rebel spirit, in the antics of Chaplin and the Keystone Kops, in Garbo's screen persona, paintings by Rouault and Hockney, Evelyn Waugh's novels, films by Fellini and Bergman, and in Monty Python, The Rocky Horror Show and the "impassive yet soulful Pierrot face" of rock stars David Bowie and Juice Newton. Focusing primarily on the period from 1890 to 1930, this intriguing study shows that the commedia dell'arte's influence has been much greater than many people suspect. The authors frequently stretch the evidence, however; the "blatant staginess" of The Cabinet of Dr. Caligari does not, as they argue, necessarily establish a link to "commedia modernism."
Copyright 1986 Reed Business Information, Inc.

1. The Triumph of Pierrot: The Commedia dell'Arte and the Modern Imagination

2. The Triumph of Pierrot: The Commedia dell'Arte and the Modern Imagination

3. The Triumph of Pierrot: The Commedia dell'Arte and the Modern Imagination

4. The Triumph of Pierrot: The Commedia dell'Arte and the Modern Imagination Green, Martin and swan, john