Items related to The Rape of Lucretia and the Founding of Republics:...

Matthes, Melissa The Rape of Lucretia and the Founding of Republics: Readings in Livy, Machiavelli, and Rousseau

The Rape of Lucretia and the Founding of Republics: Readings in Livy, Machiavelli, and Rousseau 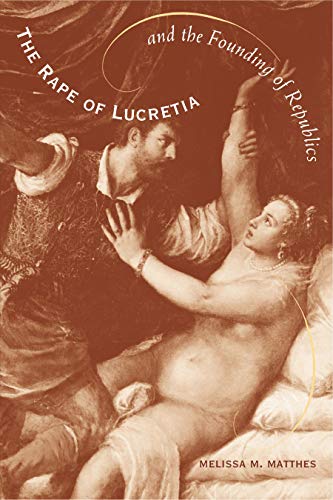 The bonds among republican citizens are created, in part, through the stories told and retold as the foundational myths of the republic. In this book, Melissa Matthes takes advantage of the way in which republican theorists in different eras—Livy, Machiavelli, and Rousseau—retell the story of the rape of Lucretia to support their own conceptions of republicanism.

The recurring presentation of this story as theater by these different theorists reveals not only the performative elements of republicanism but, as Matthes argues, adds to Hannah Arendt’s emphasis on the oral dimensions of speech and hearing the important idea of public space as a visual field.

Lucretia’s story also helps illuminate the gendering of republicanism, particularly the aspects of violence and subordination that lie at its very origin. By focusing attention on this underlying and deeply gendered quality of republics, Matthes brings republican theory into fruitful dialogue with feminism.

Melissa M. Matthes is Assistant Professor of Government & Politics and Women's Studies at the University of Maryland. Her articles have appeared in Alif and Political Theory, and she has contributed a chapter to The Nature of Woman and the Art of Politics (Eduardo Velasquez, ed., 1999).

“This book investigates the various and often surprising use by political thinkers of the story about the rape of Lucretia and its role in the founding of the Roman republic. This turns out to be a rich theme in the history of republican political thought, one that Matthes explores with enthusiasm and insight. The book should be of interest not only to students of the history of political thought but also to students of the representation of women in political and dramatic literature.”

“This book makes an important contribution to republican theorizing and will be of interest to political theorists in general, and to those working in the republican and feminist traditions in particular. [It is well written, integrates fresh texts with more familiar material, and provides a new prism through which to examine issues such as the origins of civic attachment and the meaning of citizenship.]”

“What is the relationship between storytelling and politics? To answer this question is to grapple with the political significance of narrative, as both a practice and product of symbolization. Melissa Matthes’s study of how the story of the rape of Lucretia figures in the republican tradition offers a powerful response to this question, and in the process helpfully elucidates narrative’s political efforts.

By showing how narratives of femininity and masculinity simultaneously thread through and give form to republics, the book makes a compelling case for storytelling as itself a form of politics.”

“The strength of the work lies in Matthews’ in-depth textual analysis, which illustrates the historical role myth plays in politics.”

“These books on the civic republican tradition are lively, learned, and filled with complex, subtle arguments that draw upon scholarship from the apparently bottomless well of political theory in order to nourish the ever expanding field of ‘gender.'”

1. The Rape of Lucretia and the Founding of Republics: Readings in Livy, Machiavelli, and Rousseau

2. The Rape of Lucretia and the Founding of Republics: Readings in Livy, Machiavelli, and Rousseau

3. The Rape of Lucretia and the Founding of Republics: Readings in Livy, Machiavelli, and Rousseau