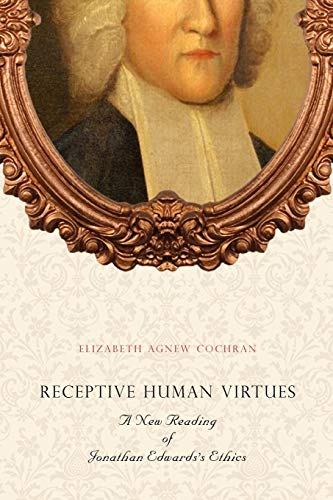 This book offers a new reading of Jonathan Edwards’s virtue ethic that examines a range of qualities Edwards identifies as “virtues” and considers their importance for contemporary ethics. Each of Edwards’s human virtues is “receptive” in nature: humans acquire the virtues through receiving divine grace, and therefore depend utterly on Edwards’s God for virtue’s acquisition. By contending that humans remain authentic moral agents even as they are unable to attain virtue apart from his God’s assistance, Edwards challenges contemporary conceptions of moral responsibility, which tend to emphasize human autonomy as a central part of accountability.

“Elizabeth Agnew Cochran’s examination of Jonathan Edwards and the human virtues engages questions of interest both to contemporary ethicists and to historians of eighteenth-century American and British thought. No other scholar has focused so intently on Edwards’s views of the human virtues or illustrated so carefully the problems inherent in their articulation in his theology or the solutions he devised to overcome those problems. The style is lucid and unpretentious, and Cochran contributes to a lively continuing conversation among ethicists and historians about the plausibility of an ethics of virtue in a Christian moral theology. By arguing skillfully that an ethics of virtue can have, as it did for Edwards, Christian rather than exclusively Aristotelian presuppositions, she stakes out a forceful position in a continuing debate.”

“Elizabeth Agnew Cochran offers very perceptive insights both into Edwards and into the value of Edwards for contemporary discussions of virtue ethics.”

“Professor Cochran explicates with unprecedented clarity Edwards’s concern to balance an exalted vision of true virtue for the saints with a natural goodness available for cultivation more generally. She thus surprises by showing Edwards's God to be concerned with building not only a church shining with moral beauty but also a world of justice and civility. This sophisticated and elegant book will become an essential resource for all future studies of the ethics of America's theologian.”

“We have long recognized that Edwards played a key role in the development of American theology and religious life more generally, and in recent years a number of scholars have begun to re-examine his role in the formation of a distinctively American form of philosophy. Given his overall importance, it is hardly surprising that Edwards’s ethical writings, including his theory of virtue, have received sustained attention. At the same time, however, much of the recent work on Edwards’s virtue ethics has minimized its distinctiveness, by assimilating it to more familiar Aristotelian approaches, or taking it out of the wider context of Edwards’s other work, or both. In this book, Elizabeth Cochran offers a bold and much-needed corrective. In her view, Edwards understands the virtues properly so called to be attributes of God, and to be attributes of human persons only in a secondary sense. In order to make the case for this interpretation, she draws on the full range of Edwards’s theological writings, in addition to considering the leading philosophical thinkers who helped to frame the context of his thought. By doing so, she shows Edwards to be a sophisticated moral thinker, important in his own context, and potentially an interlocutor in our own debates over the virtues. In particular, this study will be welcomed by those moral philosophers who have recently attempted to retrieve broadly Platonic, exemplarist theories of the virtues. Cochran shows that this approach to virtue theory can claim at least one distinguished American predecessor in Edwards. Seen from the standpoint of contemporary advocates of an exemplarist account of virtues, Edwards is particularly important because his primary interlocutors are the ‘moral sense’ theorists of the seventeenth and eighteenth century, including David Hume—the ancestors of emotivist theories of virtue which currently constitute another central strand of virtue ethics. Yet Edwards engages directly with the moral sense theorists of his own day, showing how his exemplarist account offers a more satisfactory account of virtue than they can provide, even understood on their own terms. While the terms of the relevant debates have of course changed a great deal since Edwards’s day, he nonetheless offers contemporary philosophers some valuable insights into our current debates, and defenders of exemplarist theories of virtue will find him an unexpected, yet valuable ally.”

“To restore virtue to the heart of morality, today's theological ethicists retrieve and mine the works of Augustine and Aquinas, as well as their philosophical precursors, Plato and Aristotle. Into this pantheon of virtue ethicists, Elizabeth Agnew Cochran now proposes, from the New World, the Puritan Jonathan Edwards. This surprising proposal is completely convincing and satisfying. Cochran gives us not only a compelling key in which to read the great American theologian (Edwards scholars take note!), but also a contemporary notion of moral agency, humbly cognizant of human sinfulness as well as the call to responsibility and the need for grace. Cochran's refreshingly rich theological account makes the restoration of virtue ethics all the more probable by attending to, rather than ignoring, the Reformation. Brava!”