Items related to The New Imperial Economy: The British Army and the...

The New Imperial Economy: The British Army and the American Frontier, 1764-1768 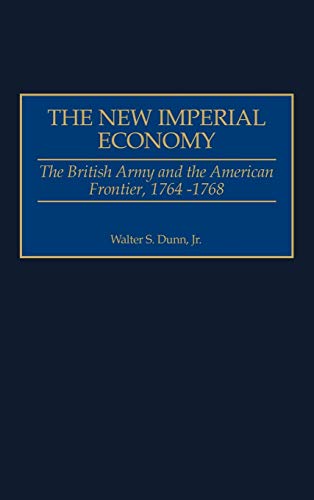 During the Seven Years War the British economy had expanded rapidly to meet the demands of equipping the army and navy as well as subsidizing Britain's European allies. After the war, the economy was left without sufficient markets to absorb the extra production. This situation led to a persistent drive to open new markets, especially in the American colonies. When the British decided to maintain an army in America after 1764, these troops became a major market for the colonists who provided them with beef, pork, flour, and rum. Colonists also sold manufactured goods to French settlers in Illinois and fur traders west of the Mississippi.

Organization of this trade to provide the most cost-effective means of supplying goods to the frontier was achieved through refinements in financial, transportation, and production techniques. By the end of 1768, competition between American merchants increased, and prices dropped dramatically. Meanwhile, British troops began moving back toward the East Coast, further depriving the colonial merchants of a major market. This period marked a severe setback for colonial merchants on the frontier and added fuel to the fires of discontent with British policies.

Looks at the role of economic factors in the worsening of relations between the British and the American colonists in the period following the Seven Years War.

2. The New Imperial Economy: The British Army and the American Frontier 1764-1768

6. NEW IMPERIAL ECONOMY, THE: THE BRIT

7. NEW IMPERIAL ECONOMY, THE: THE BRIT