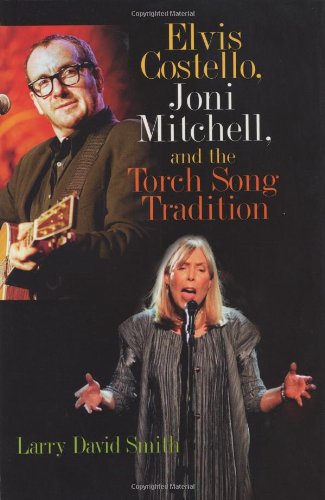 The torch song has long been a vehicle for expression―perhaps American song's most sheerly visceral one. Two artists in particular have built upon this tradition to express their own unique outlooks on their lives and the world around them. Joni Mitchell, Elvis Costello, and the Torch Song Tradition combines biographical material, artist commentary, critical interpretation, and selected exemplars of the writers' work to reveal the power of authorship and the creative drive necessary to negotiate an artistic vision in the complicated mechanisms of the commercial music industry. Author Larry David Smith, as in his Bob Dylan, Bruce Springsteen, and American Song, considers the complicated intersection of biography, creative philosophy, artistic imperative, and stylistic tendencies in the work of both Joni Mitchell and Elvis Costello―two songwriters with seemingly nothing in common, one famously confessional and one famously confrontational. Yet, as Smith shows so incisively, they are two personalities that prove fascinatingly complementary.

Mitchell and Costello both yielded bodies of work that are cohesive, coherent, and rich in meaning. Both have made historic contributions to the singer-songwriter model, two rebellious respones to the creative and commercial compromises associated with their chosen field, and two distinct thematic responses to the torch song tradition. Smith examines these responses, offering a unique and invaluable exploration of the craft of two of the last century's most towering musical figures.

Explores how the torch song tradition combined with the force of personality in two major singer-songwriters, examining their respective life's work and the ways in which they reflect the artists' similar and different outlooks on their world.

Book Description Praeger, 2004. Hardcover. Condition: Good. Connecting readers with great books since 1972. Used books may not include companion materials, some shelf wear, may contain highlighting/notes, may not include cdrom or access codes. Customer service is our top priority!. Seller Inventory # S_284470748

Book Description Praeger, 2004. Hardcover. Condition: VERY GOOD. Pages are intact and are not marred by notes or highlighting, but may contain a neat previous owner name. The spine remains undamaged. Supplemental materials are not guaranteed with any used book purchases. Seller Inventory # 0275973921_abe_vg

Book Description Praeger, 2004. Condition: Good. A+ Customer service! Satisfaction Guaranteed! Book is in Used-Good condition. Pages and cover are clean and intact. Used items may not include supplementary materials such as CDs or access codes. May show signs of minor shelf wear and contain limited notes and highlighting. Seller Inventory # 0275973921-2-4