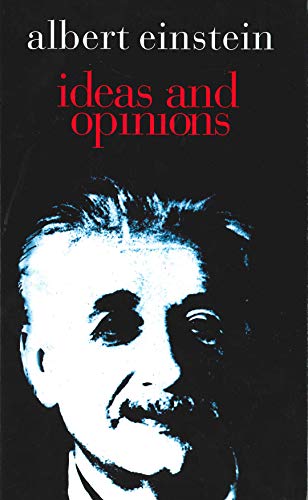 IDEAS AND OPINIONS contains essays by eminent scientist Albert Einstein on subjects ranging from atomic energy, relativity, and religion to human rights, government, and economics. Previously published articles, speeches, and letters are gathered here to create a fascinating collection of meditations by one of the world's greatest minds.

Albert Einstein (1879–1955), one of the greatest thinkers of the twentieth century, was born in Ulm, Germany, to German-Jewish parents. He published his first great theories in Switzerland in the early 1900s while working as a patent clerk.

Alan Lightman is the author of six novels, including Einstein’s Dreams, which was an international bestseller, and The Diagnosis, which was a finalist for the National Book Award. He is also the author of three collections of essays and several books on science. His latest work is the memoir of his family, Screening Room. His work has appeared in The Atlantic, Granta, Harper’s, The New Yorker, The New York Review of Books, and Nature, among other publications. Since beginning his career as a theoretical physicist, Lightman has taught at Harvard and at MIT, where he was the first person to receive a dual faculty appointment in science and in the humanities. He lives in the Boston area.

Shipping: US$ 10.67
From United Kingdom to U.S.A.
Destination, rates & speeds