Items related to Demosthenes, Speeches 1–17 (The Oratory of Classical... 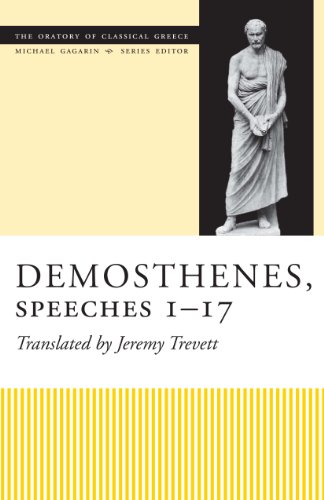 This is the fourteenth volume in the Oratory of Classical Greece. This series presents all of the surviving speeches from the late fifth and fourth centuries BC in new translations prepared by classical scholars who are at the forefront of the discipline. These translations are especially designed for the needs and interests of today's undergraduates, Greekless scholars in other disciplines, and the general public.

Classical oratory is an invaluable resource for the study of ancient Greek life and culture. The speeches offer evidence on Greek moral views, social and economic conditions, political and social ideology, law and legal procedure, and other aspects of Athenian culture that have recently been attracting particular interest: women and family life, slavery, and religion, to name just a few.

This volume contains translations of all the surviving deliberative speeches of Demosthenes (plus two that are almost certainly not his, although they have been passed down as part of his corpus), as well as the text of a letter from Philip of Macedon to the Athenians. All of the speeches were purportedly written to be delivered to the Athenian assembly and are in fact almost the only examples in Attic oratory of the genre of deliberative oratory. In the Olynthiac and Philippic speeches, Demosthenes identifies the Macedonian king Philip as a major threat to Athens and urges direct action against him. The Philippic speeches later inspired the Roman orator Cicero in his own attacks against Mark Antony, and became one of Demosthenes' claims to fame throughout history.

Jeremy Trevett is Associate Professor of History at York University.