Items related to Mending Fences: The Evolution of Moscow's China... 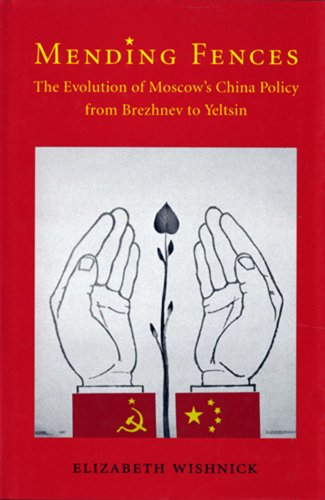 Mending Fences illuminates the forces driving Moscow’s China policy, from the Ussuri River clashes in 1969 to the "strategic partnership" of the 1990s. Elizabeth Wishnick, noted expert on the Russia and China, analyzes the efforts of Soviet leaders simultaneously to maintain their supremacy in the international communist movement, defend their borders from a perceived China threat, and ensure the compliance of regional authorities in enforcing China policy.

Although a consensus in favor of containing China prevailed within the Moscow policy community throughout the 1970s, major shifts in China policy came with changes in the Soviet leadership, most notably in the mid-1980s. As many Russians became disenchanted with Western models of market democracy and with their country's sharply curtailed role in international affairs in the post-Soviet era, the Yeltsin administration touted a growing "strategic partnership" with China.

Wishnick outlines the successes of Russian-Chinese cooperation and analyzes the main barriers to full-scale partnership, including historical grievances, limited economic ties, tensions in regional relations. Despite ongoing efforts by Russian and Chinese leaders to resolve these issues, she concludes that the future of the Sino-Russian partnership will depend on an unpredictable interplay of forces of domestic and international change.

Mending Fences is the result of a decade of research in Moscow, Beijing, and the regions along the Russo-Chinese border. Fluent in Russian and Chinese, the author has drawn on recently declassified documents from the archives of the Central Committee of the Soviet Communist Party, the Soviet Foreign Ministry, the KGB, and the Khabarovsk Regional Communist Party; numerous interviews with influential Russian and Chinese officials and scholars; and regional and national periodicals and books from both Russia and China.

The first work in recent years to analyze Russian-Chinese relations from Moscow’s perspective, Mending Fences is a necessary addition to the literature on the late Cold War era and the strategic triangle between the United States, the Soviet Union, and the People’s Republic of China.

An important study of Russian-Chinese relations from Moscow?s perspective

2. Mending Fences: The Evolution of Moscow's China Policy from Brezhnev to Yeltsin (Paperback or Softback)

3. Mending Fences: The Evolution of Moscow's China Policy from Brezhnev to Yeltsin

6. Mending Fences: The Evolution of Moscow's China Policy from Brezhnev to Yeltsin

7. Mending Fences: The Evolution of Moscow's China Policy from Brezhnev to Yeltsin