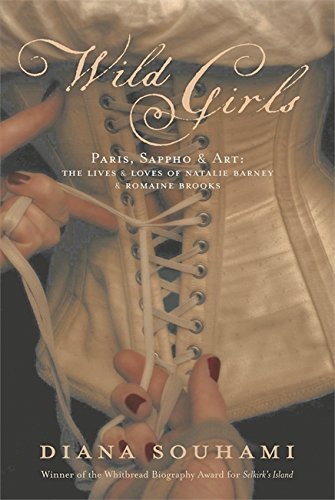 Natalie and Romaine met in London during World War I and their partnership lasted until Natalie died 52 years later. They were both American expatriates; unconventional, energetic, flamboyant and rich.

Natalie was known as ‘the wild girl of Cincinnatti’. She had numerous affairs with other women: Renée Vivien who nailed shut the windows of her apartment, wrote about the loveliness of death, drank eau de cologne and died of anorexia aged 30; and Dolly Wilde niece of Oscar, who ran up terrible phone bills and died of a drugs overdose. She wrote books of aphorism, memoirs and poems and her Friday afternoon salons in the cobbled garden of her Parisian house were for ‘introductions and culture’. They were frequented by Gertrude Stein, Colette, Radclyffe Hall and Edith Sitwell.

Romaine achieved fame in her own lifetime and after as an artist. She painted her lovers including Gabriele d’Annunzio with whom she had a terrible and tortured relationship, and the ballerina Ida Rubinstein. However her relationship with Natalie was constant and in their eventful years together they threw up a liberating spirit of culture, style and candour.

Diana Souhami is the author of many widely acclaimed books, and she has also written plays for radio and television. She is presently working on two new books on Alexander Selkirk, and Natalie Barney and Romaine Brooks.

"Wild Girls is a wonderful evocation of an era and of a relationship frightening in both its intensity and its bleakness. It is interspersed with tales of Souhami's own life in London bars or cafes... This gives fuel to the contention that all biography is covert autobiography: we seize and dwell on those elements of our subject's life that illuminate our own." -- JAD ADAMS * GUARDIAN * Diana Souhami tells the story of those years with her usual wit and detail... what Souhami makes clear is that we are not only talking about sexual difference but about a completely different way of living. -- JEANETTE WINTERSON * THE TIMES * Diana Souhami, in writing about a book about them and the significant others in each of their lives has produced a series of miniatures that add up to a group portrait of a singular society that flourished in Paris (and as Souhami points out, would have been impossible anywhere else) during the first third of the 20th century... an exceptionally witty and original biographer. * SUNDAY TIMES * Natalie's salon and Romaine's paintings may be no more than cultural footnotes, but their love, in all its tortured resistless grandeur, deserves a kind of immortality. -- Jonathan Keates * LITERARY REVIEW * Diana Souhami's cunning insertion of occasional vignettes from her own, rather less opulent existence as a modern gay woman enhances our awareness that this book is as much a tribute to lesbian fulfilment as a straightforward chronicle of its subjects' lives. Her skill, not just in garnering detail, but in finding the perfect place for, is unrivalled? -- Jonathan Keates * LITERARY REVIEW * Far more intriguing is something that lies outside this story altogether. At the start of each chapter is placed a short passage in itallics, never more than a paragraph or two. Here the author seems to be narrating some of her personal lesbian experiences.... These are fascinating and I sincerely hope Ms Souhami will expand them and produce her own memoir of life as a wild girl. -- SELINA HASTINGS * SUNDAY TELEGRAPH * Diana Souhami describes the whole complex relationship well, particularly the poignancy of the final years in the lives of her two Wild Girls.... Pages are crammed with descriptions of exotic characters, their extravagances and eccentricities, the lillies, the pearls, the velvet-lined rooms... -- SELINA HASTINGS * SUNDAY TELEGRAPH *

Wild Girls: Paris, Sappho and Art: the lives and loves of Natalie Barney and Romaine Brooks

Shipping: US$ 31.22
From United Kingdom to U.S.A.
Destination, rates & speeds