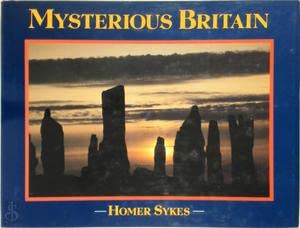 From the heart of the West Country to the remote highlands of Scotland, the landscape of Britain is dotted with extraordinary sights, scapes and structures - treasure-filled Neolithic burial chambers, enigmatic hill carvings, holy wells and standing stones, crude pagan effigies, grisly fifteenth-century memento mori and fanciful follies in country parks. Homer Sykes captures these marvels of nature and of man in full colour and recounts their history and the legends that surround them.

Homer Sykes is a well-known freelance photographer and a member of the internationally renowned group, Network Photographers. He has travelled widely on photographic assignments throughout the world. His passion however is Britain and his books include Once a Year: Some Traditional British Customs and Mysterious Britain. He was co-author with Roger Protz of The Village Pub, with Godfrey Smith of The English Season, and with Roy Kerridge of The Storm is Passing Over. Homer Sykes currently lives in London, SW20.

Yet another book on Britain's prehistoric monuments should have something special to recommend it, and this one does: Sykes' sumptuous, magnificently composed portraits of Long Meg, the Cerne Abbas Giant, the White Horse at Uffington, and other British antiquities. The clear, well-researched prose is good enough, but the photographs are simply brilliant. Scotland's vast Ring of Brodgar, for instance--a famous stone circle set on a pancake-flat isthmus--is a difficult subject, and most attempts fail to capture its magnetic mystery; Sykes' portrait of it is mostly looming sky, broken at the horizon by a lemon sunset before which 20 stones stand like black-clad mourners. Sykes is to megalith as Avedon is to celebrity. Each photo here is a treasure. Pat Monaghan