Items related to Semiology of graphics 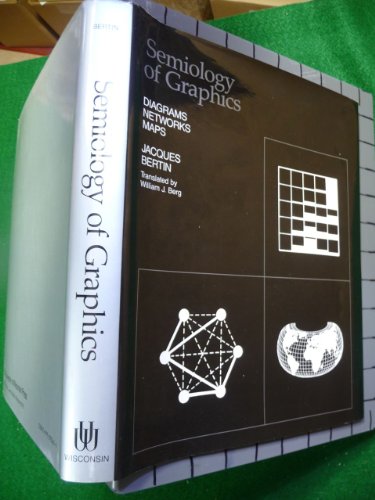 Originally published in French in 1967, Semiology of Graphics holds a significant place in the theory of information design. Founded on Jacques Bertin’s practical experience as a cartographer, Part One of this work is an unprecedented attempt to synthesize principles of graphic communication with the logic of standard rules applied to writing and topography. Part Two brings Bertin’s theory to life, presenting a close study of graphic techniques including shape, orientation, color, texture, volume, and size in an array of more than 1,000 maps and diagrams.

Jacques Bertin is a French cartographer and theorist. In 1954 he founded the Cartographic Laboratory of the École pratique des hautes études and in 1957 he was named director of education. In 1967, Bertin became a professor at the Sorbonne, and in 1974 he was appointed director of education and director of the Geographical Laboratory of the École des hautes études en sciences sociales which is part of the École pratique des hautes etudes. In the late 1970s he became head of research at the Centre national de la recherche scientifique. Bertin is an internationally recognized authority on the analytic study of graphics.