Items related to The Impressionist and the City: Pissarro`s Series

The Impressionist and the City: Pissarro`s Series 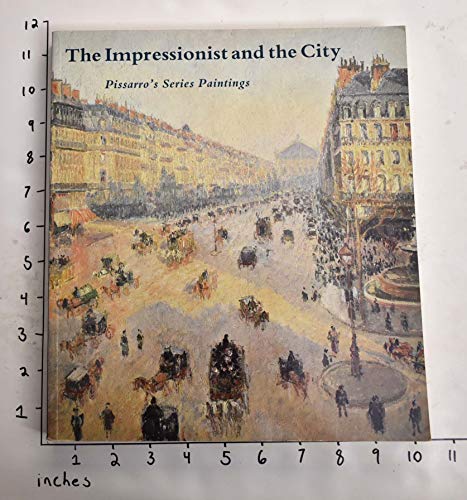 Camille Pissarro is perhaps best known for the landscape paintings of his early career, yet in the final decade of his life (1893-1903) he began to depict urban scenes and his paintings from this period, of Paris, Rouen and the busy ports of Dieppe and Le Havre formed an important component of his artistic output. At this time Pissarro, like Monet, started to work on canvases in series, ofthen pointing several simultaneously and discarding one temporarily when the light, the weather or his mood altered. He started all of them at the scene and worked with extraordinary speed and deftness. In this book, the authors set Pissarro's cityscapes in their broad art-historical context, looking also at contemporary treatments of the urban scene by Vuillard, Bonnard and Toulouse-Lautrec. Using Pissarro's extensive correspondence from this period, they reveal the artist's own attitude towards his final works. The book includes a catatogue of Pissarro's urban series, each one introduced by an overview covering the history of the cityscape pictured and the production, exhibition history and early critical reception of the series. This book is the catalogue for an exhibition of Pissarro's cityscape paintings at the Dallas Museum of Art (November 15, 1992 - January 31, 1993). The exhibition will then be shown at the Philadelphia Museum of Art from March 7 to June 6, 1993 and at the Royal Academy in London from July 2 to October 10, 1993.

The catalog of an exhibition traveling to Dallas, Philadelphia, and London in 1992-93, this book considers approximately 150 paintings done by Pissarro (1830-1903) in the last decade of his life. These paintings are repeated meditations on various motifs in Paris, Rouen, Dieppe, and Le Havre. Brettell (director, Dallas Museum of Art) places Pissarro in the urban view-painting tradition, while Joachim Pissarro, a descendant of the artist, relates these pictures to the artist's development and attempts to understand his intent in painting series. Graced by beautiful plates, this book is appropriate for both lay readers and specialists.
- Jack Perry Brown, Art Inst. of Chicago Lib.
Copyright 1993 Reed Business Information, Inc.

1. The Impressionist and the City: Pissarro`s Series