Items related to Theater of the Avant-Garde, 1890-1950: A Critical Anthology 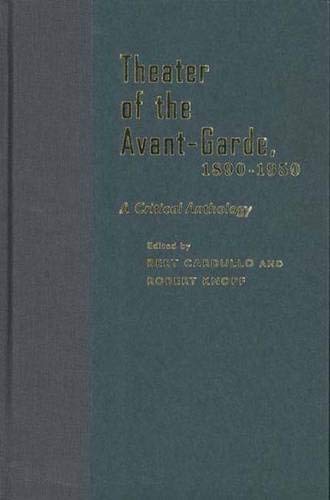 An essential volume for theater artists and students alike, this anthology includes the full texts of sixteen important examples of avant-garde drama from the most daring and influential artistic movements of the first half of the twentieth century, including Symbolism, Futurism, Expressionism, Dada, and Surrealism. Each play is accompanied by a bio-critical introduction by the editor, and a critical essay, frequently written by the playwright, which elaborates on the play’s dramatic and aesthetic concerns. A new introduction by Robert Knopf and Julia Listengarten contextualizes the plays in light of recent critical developments in avant-garde studies. By examining the groundbreaking theatrical experiments of Jarry, Maeterlinck, Strindberg, Artaud, and others, the book foregrounds the avant-garde’s enduring influence on the development of modern theater.

Cardullo (theater and drama, Univ. of Michigan) and Knopf (theater, Connecticut Coll.) have compiled an important anthology of the now-classic drama widely known as avant-garde. The many styles and movements represented here were mined, in the words of Cardullo, to "bring genuine dramatic Expressionism into central focus." Inexplicably, the writings of major avant-garde figures are long out of print or remain untranslated. In addition to the complete text of plays by Antonin Artaud, Gertrude Stein, August Strindberg, and Alfred Jarry, the editors have included such lesser-known but equally influential writers as Roger Virac, Filippo Marinetti, and Aleksandr Vvedensky. While making a case for new inclusions, Cardullo accepts the standard, and most useful, designations for what constitutes a Dada piece vs. an Absurd or Futurist one and uses the terms avant-garde and modernist synonymously. However, a more thorough exploration of the "classic" avant-garde's impact on today's theater would have been a welcome addition to the introductory essay. Indeed, Cardullo makes no effort to mask his disdain for most "performance art," complaining that "the avant-garde can today do little more than impotently express disenchantment with its own ideals." Still, the comprehensive and varied nature of these works and the accompanying illuminating essays will make this a standard text for any serious study of 20th-century drama. Douglas McClemont, New York
Copyright 2001 Reed Business Information, Inc.