Items related to Tina Modotti: Between Art and Revolution

Tina Modotti: Between Art and Revolution 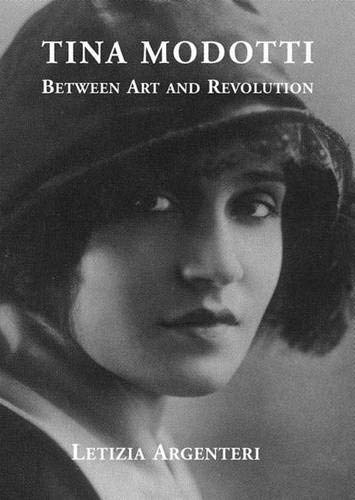 A charismatic stage and screen actress. A model whose beauty inspired some of the most arresting images of the twentieth century. A visionary photographer. A revolutionary with deep commitments to communism. A woman whose life, loves, and death were controversial. Tina Modotti (1896–1942) was all of these. Her life was one of almost unimaginable glamor, scandal, and turmoil. This biography portrays Modotti accurately and fairly, cutting through the distortions of myth and rumor that surround her. Perhaps best known as the lover, model, and apprentice of American photographer Edward Weston, Modotti emerges in these pages as a complex woman, deeply passionate in her relationships as well as her art and politics.

Letizia Argenteri is professor of history in the Department of Social Sciences, San Diego Mesa College.

Impatient with well-meaning but overly pious leftist and feminist accounts, historian Argenteri here looks to place Modotti (1896-1942) deeply within her social moment, and consequently devotes little direct attention to Modotti's famed modernist photographs. Though Argenteri covers far more, the bare facts include Modotti's 1913 emigration from Udine to San Francisco; her transformation from seamstress to a brief period as a stage and screen actress (playing Mexican women in two films); her time with artist-activist Robo de Richey that brought her into close and compelling contact with the cultural wing of Mexican communism; and her seven-year stint as the apprentice and lover of photographer Edward Weston in early 1920's Mexico, where Modotti did much of her major work. Modotti joined the Mexican Communist Party in 1927, and took up with Cuban revolutionary Julio Antonio Mella. When Mella was murdered, Modotti became a prime if implausible suspect; when the Mexican president was assassinated, she was accused and deported. In Moscow she fell in love with the Stalinist Vittorio Vidali, and in 1934 left with him for Spain. Throughout the Civil War, Modotti worked as a Red Aid nurse (she is the alleged model for Hemingway's Maria in For Whom the Bell Tolls), while Vidali executed those deemed a threat to the popular front. With the temperateness that characterizes her study, Italian scholar Argenteri assesses Modotti's oft-suppressed knowledge of these murders. Most sympathetically, she suggests that unlike Vidali and other comrades, Modotti never recovered from the shock of the failed Civil War. She returned to Mexico a weary refugee, and lived alone in a tiny house until her mysterious death in a taxi at age 46. While Octavio Paz claimed that Modotti belonged "'more to the history of passions than to the history of ideologies,'" Argenteri stresses her devotion to communism, a moveable cause more constant than any of her lovers but as fallibly human as all of them. A 60-page b&w photo insert shows Modotti at many stages of her life, along with some of her work.
Copyright 2003 Reed Business Information, Inc.

1. Tina Modotti: Between Art and Revolution

Book Description PAPERBACK. Condition: New. Book Cover and ISBN may be different from US edition but contents as same US Edition. Excellent Quality,Quick delivery by USPS/UPS/FEDEX/DHL/ARAMEX, We may ship the books from Asian regions for inventory purpose. Our courier service is not available at PO BOX. Seller Inventory # abe_jan_9780300098532

4. Tina Modotti Between Art and Revolution

6. Tina Modotti Between Art and Revolution

Book Description Condition: New. Brand New Original US Edition.We Ship to PO BOX Address also. EXPEDITED shipping option also available for faster delivery.This item may ship fro the US or other locations in India depending on your location and availability. Seller Inventory # AUDEC-28637

7. Tina Modotti: Between Art and Revolution.

8. Tina Modotti: Between Art and Revolution

9. Tina Modotti: Between Art and Revolution

10. TINA MODOTTI: BETWEEN ART AND REVOLUTION