Items related to Picking Up the Pieces: Two Accounts of a Psychoanalytic... 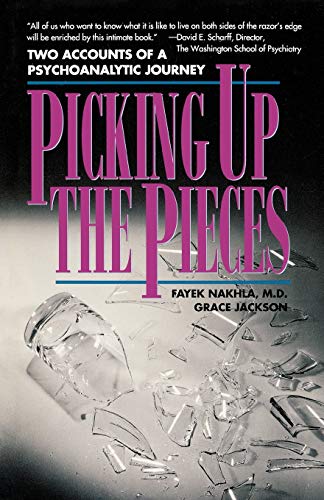 When Grace Jackson began analytic therapy with Dr. Fayek Nakhla, she was struggling with the feeling that she did not exist. After many months of baffling silence in her therapy sessions, she experienced a psychotic regression characterized by violent behavior and self-mutilation. This engrossing and moving book is the story of the first few years of Grace's controversial analytic treatment, told in separate chapters by analyst and patient. This is the first time that a detailed account of the treatment process has been presented from both points of view.

Although Grace Jackson had a job and functioned relatively well in the outside world, the one activity that made her feel real―aside from cutting herself―was writing in a diary; her narrative is interspersed with excerpts from this journal, giving us a privileged insight into her private world, into her suffering and terror. Dr. Nakhla's account tells us of his misgivings as he attempted to understand Grace's extreme mental pain and conflict and to devise an effective treatment. Dr. Nakhla's approach, which eventually proved successful, was based on his understanding of the work of the British psychoanalyst D.W. Winnicott, and it followed the dangerous course of permitting Grace to experience her regression fully―even its violent aspects―in order to achieve the rebirth of her self. Together the two narratives provide an intimate picture of mental illness and of the therapeutic relationship that can help the patient regain sanity.

From Kirkus Reviews:
A harrowing yet oddly diffident reconstruction of a young woman's desperate search for a self through self-mutilation, as described separately by her analyst and herself at the end of 16 years of treatment. When Jackson (a pseudonym) arrived in New York in the early 1970's--accompanied by a friend, Susan, with whom she had an unusually dependent relationship--she immediately began therapy with Nakhla, a psychiatrist, and for the first 18 months went to sessions regularly, only to sit in silence. A breakthrough of sorts occurred when Jackson offered Nakhla the gift of a piece of homemade pottery, which she then shattered with his permission. When Susan decided to get married, Jackson turned to Nakhla as her last remaining link to the world and, in the process of overcoming a nonexistent self-image through more frequent meetings, embarked on a series of wrist-slashings and other brutal assaults on her body. Nakhla, viewing Jackson's actions not as suicidal but as the painful means to a positive end--the emergence from a severely regressive state--allowed his patient to express herself in this way while patching her up and urging her to stop: With brief hospitalization and an outpouring of emotional support from her family, she finally did. As Jackson's life outside therapy returned to normal, Nakhla came to appreciate her lifelong commitment to journal-writing as evidence of an independent, self-motivated personality, enabling him to break through his own difficulties in relating to his patient. A saga of psychotherapy taken to its bloody limit: fascinating and disturbing in spite of the dull, objective style adopted by each narrator. -- Copyright ©1993, Kirkus Associates, LP. All rights reserved.

Picking Up the Pieces

Shipping: US$ 18.58
From United Kingdom to U.S.A.
Destination, rates & speeds

Picking Up the Pieces

Shipping: US$ 30.99
From United Kingdom to U.S.A.
Destination, rates & speeds