Items related to The Aeneid 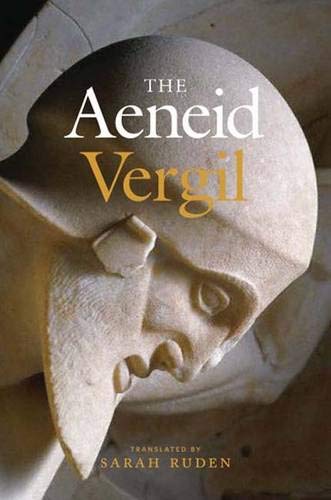 This extraordinary new translation of Vergil's Aeneid stands alone among modern translations for its accuracy and poetic appeal. Sarah Ruden, a lyric poet in her own right, renders the classic poem in the same number of lines as the original work—a very rare feat that maintains technical fidelity to the original without diminishing its emotional power.

Ruden’s translation follows Vergil’s content faithfully, and the economy and fast pace she achieves are true to his own unflagging narrative force. With its central theme of national destiny versus. the destiny of individuals, the poem has great resonance in our own times, and Ruden adheres closely to the poet’s message. Her rendering of Vergil’s words gives immediacy to his struggling faith that history has beauty and purpose in spite of its pain. With this distinguished translation, modern readers can experience for themselves the timeless power of Vergil's masterpiece.

Sarah Ruden’s previous translations include Aristophanes’ Lysistrata and Petronius' Satyricon. She is a visiting scholar at Yale Divinity School.

“Robert Fagles, shortly before his death, set the bar very high for translating [Virgil’s] Aeneid. Yet already the scholar-poet Sarah Ruden has soared over the bar. . . The translation is alive in every part. . . . This is the first translation since Dryden’s that can be read as a great English poem in itself.”—Garry Wills, New York Review of Books

"Ruden's translation separates itself from others by using the same number of verses as Vergil does. She has produced a fresh poetic translation for contemporary English-speaking readers, one that speaks with its own voice."—David Quint, author of Cervantes's Novel of Modern Times: A New Reading of "Don Quijote"

"Sarah Ruden's translation is distinguished by the quality of its verse, the unrelenting propulsive force of its narrative drive, and the intelligence with which she has shaped Vergil to fit her pentameter lines."—Charles Martin, translator, Metamorphoses: A New Translation

"Grace and power reside in Sarah Ruden’s economical line-for-line translation of The Aeneid. Like Vergil’s Latin, her English may easily be lifted off the page and given voice."—Janet Lembke, translator of Virgil’s Georgics

“Toning down the magniloquence, Sarah Ruden gives us an Aeneid more intimate in tone and soberer in measure than we are used to—a gift for which many will be grateful.”—J.M. Coetzee
(J.M. Coetzee)

"By conveying the emotional force of the Latin, Ruden makes the Aeneid newly vivid, exciting, and relevant. This translation proves why, for centuries, Virgil's remarkable epic has been required reading."—Mary Lefkowitz, author of Greek Gods, Human Lives: What We Can Learn From Myths
(Mary Lefkowitz)

"Beautifully done. . . . Ruden's version earns special praise for measuring up to the challenge set by Lattimore and Fagles and then going one better in her fidelity to the actual form of the poem, without sacrificing fidelity to the word to any greater extent than they. It deserves to be widely read and admired."—Joseph Farrell, Translation and Literature (Joseph Farrell Translation and Literature)

2. The Aeneid Vergil and Ruden, Sarah