Items related to Jeffersons at Shadwell (The Lamar Series in Western...

Jeffersons at Shadwell (The Lamar Series in Western History) 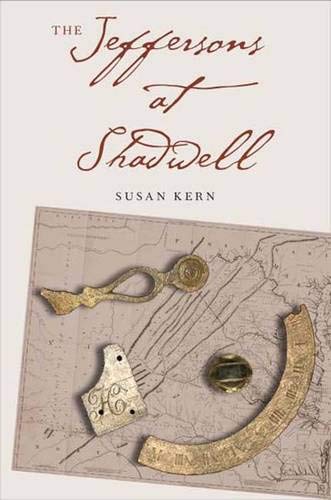 Merging archaeology, material culture, and social history, historian Susan Kern reveals the fascinating story of Shadwell, the birthplace of Thomas Jefferson and home to his parents, Jane and Peter Jefferson, their eight children, and over sixty slaves. Located in present-day Albemarle County, Virginia, Shadwell was at the time considered "the frontier." However, Kern demonstrates that Shadwell was no crude log cabin; it was, in fact, a well-appointed gentry house full of fashionable goods, located at the center of a substantial plantation.

Kern’s scholarship offers new views of the family’s role in settling Virginia as well as new perspectives on Thomas Jefferson himself. By examining a variety of sources, including account books, diaries, and letters, Kern re-creates in rich detail the daily lives of the Jeffersons at Shadwell—from Jane Jefferson’s cultivation of a learned and cultured household to Peter Jefferson’s extensive business network and oversight of a thriving plantation.

Shadwell was Thomas Jefferson’s patrimony, but Kern asserts that his real legacy there came from his parents, who cultivated the strong social connections that would later open doors for their children. At Shadwell, Jefferson learned the importance of fostering relationships with slaves, laborers, and powerful office holders, as well as the hierarchical structure of large plantations, which he later applied at Monticello. The story of Shadwell affects how we interpret much of what we know about Thomas Jefferson today, and Kern’s fascinating book is sure to become the standard work on Jefferson's early years.

Susan Kern is currently visiting assistant professor of history at the College of William and Mary. She lives in Virginia.

"In this ground-breaking and original work, Susan Kern marvelously re-creates the lost world that gave us one of the most important Americans who ever lived. Kern's research is impeccable, her writing fluid, and no one will ever again be able to consider Jefferson without taking this terrific book into account. A great achievement."--Jon Meacham, Pulitzer Prize-winning author of American Lion and Franklin and Winston
(Jon Meacham)

“Kern’s re-creation of the daily routines at Shadwell is both painstaking and path-breaking. All future students of Jefferson will turn to this as the standard account of his childhood world.”—Lauren Winner, Duke University  (Lauren Winner)

"A scholarly portrait of life in the pre-revolutionary South that overturns some popular perceptions and historians' views . . . . [Kern] provides an intensely fact-based account of the young Jefferson's 'well-ordered, well-connected world.'"—Publishers Weekly
(Publishers Weekly)

“Kern has intimate knowledge not only of the archaeology of Shadwell but also of the family history of the Jeffersons. This book provides us with an in-depth look at the material culture, social milieu, and domestic lives of the free whites and enslaved blacks who lived at Thomas Jefferson’s childhood home.”—Timothy J. Shannon, Gettysburg College  (Timothy J. Shannon)

"This elegant, vivid book shows us what a gifted historian and archaeologist can do with the state-of-the-art tools of her trades. Susan Kern has revealed a Shadwell we thought we'd never know."—Virginia Scharff, author of The Women Jefferson Loved (Virginia Scharff)

“A quiet revolution in our understanding both of Thomas Jefferson’s childhood and of late colonial Virginia! The material culture of Shadwell is delicately reconstructed from archeology and the documentation of Peter Jefferson’s deceased estate.  A must-read for all interested not just in the Founder but also in the history of family and household in America.”—Rhys Isaac, author of The Transformation of Virginia, 1740-1790 (Rhys Isaac)

1. The Jeffersons at Shadwell

2. The Jeffersons At Shadwell

3. The Jeffersons at Shadwell (The Lamar Series in Western History)

4. The Jeffersons at Shadwell

5. The Jeffersons at Shadwell (The Lamar Series in Western History)

6. The Jeffersons at Shadwell

7. The Jeffersons at Shadwell

8. Jeffersons at Shadwell (The Lamar Series in Western History)

9. The Jeffersons at Shadwell (The Lamar Series in Western History) Kern, Susan