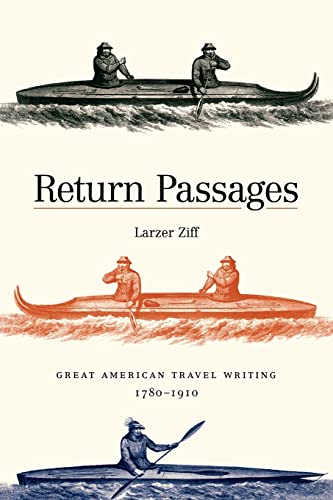 In this arresting book, Larzer Ziff traces the history of distinctively American travel writing through the stories of five great representatives. John Ledyard (1752–1789) sailed with Captain Cook, walked across the Russian empire, and attempted to find a transcontinental route across North America. John Lloyd Stephens (1805–1852), who today is recognized as the father of Maya archaeology, uncovered hundreds of ruins in two expeditions to the Yucatan and Central America, and he also was one of the first Americans to reach the Arabia Petrae. Bayard Taylor (1825–1878) invented travel writing as a profession. The only writer on Commodore Perry’s expedition to Japan, he traveled also to Europe, Africa, India, and the Arctic Circle solely for the purpose of producing books about these journeys. Finally, in Mark Twain’s unabashed concentration on the haps and mishaps of the tourist and Henry James’s strikingly different cosmopolitan accounts of European sites and societies, travel writing conclusively emerged as great art.

Ziff explains the ways in which the American background of these writers informed their impressions of foreign scenes and shows how America served always as the final object of the critical scrutiny they brought to bear on other people and their lands.

This book, the first to trace the distinctive history of American travel writing, focuses on five great representatives of the genre: John Ledyard who set out to walk around the world in the 1700s; John Lloyd Stephens, the father of Mayan archaeology; Bayard Taylor, the nineteenth-century wanderer who invented travel writing as a profession; Mark Twain, who focused on the haps and mishaps of the uncultivated tourist; and Henry James, from whose cosmopolitan accounts of other societies travel writing emerged as great art.

Larzer Ziff is Caroline Donovan Research Professor of English at The Johns Hopkins University. Among his books are The American 1890s, Literary Democracy, and Writing in the New Nation, the last published by Yale University Press.