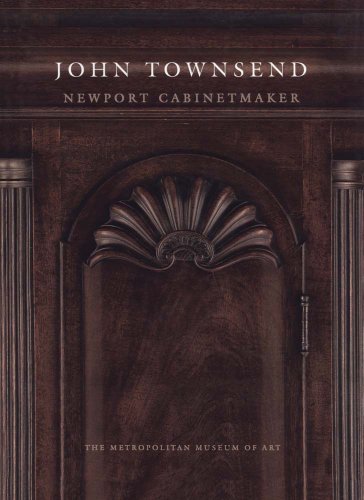 John Townsend: Newport Cabinetmaker is a landmark presentation of a supreme cabinetmaker. It offers a catalogue of the documented oeuvre of John Townsend (1733-1809), the great Newport cabinetmaker, and describes the community of skilled makers in which he worked. It gives an unparalleled views of the physical and economical realities of Newport and of the artisanal culture that nourished cabinetmakers who were among the best to ever work in America.

Between 1756 and 1800 John Townsend signed his name to more than thirty pieces of furniture of his own making. These signatures document a remarkable body of work, securing for him a special place in the history of American cabinetmaking, precisely what he intended. The signed examples are, virtually without exception, pieces of the highest quality. His habit of adding the date suggests an acute historical awareness and a determination to document his legacy. Townsend seems to have sought perfection compulsively, and his hallmarks are precision, elegance, and fastidious attention to detail. Labor-intensive refinements are evident in the interiors as well as the exteriors of every documented piece. Here lengthy discussions of materials and construction practices elucidate the personal style that placed Townsend apart from other Newport joiners.

John Townsend was among the most prominent of the large group of cabinetmakers that brought fame to Newport. Boston had long set the style in cabinetmaking and much else in New England, but in the 1750s and 1760s Newport experienced an extraordinary period of prosperity during which it challenged Boston standards. The bonnet-top high chest, the most fashionable and enduringly popular piece of eighteenth-century case furniture, had been developed in Boston. Newport took this innovation and made it altogether richer and more memorable by adding a shell motif to the blocking. This shell, so evident in Townsend's work, became the signature feature, the emblem of Newport furniture.

There were at least ten other joiners, including John's father, Christopher, in the extended Townsend family. The cabinetmaker John Goddard, later widely renowned, married one of John's cousins. Complex business and familiar relationships existed between the various members of the family and their shops. This dense environment has been difficult to explore, and works by the lesser-known Townsends and Goddards began to be identified only in the 1980s. The Newport group of cabinetmakers is examined in detail in this publication, with period documents and maps that bring a new clarity to this complicated milieu. The collateral material includes a Townsend family tree, transcriptions of the wills of Christopher and John Townsend, and a history of the furniture that descended in the Townsend family. An essay on the critical fortunes of Newport furniture and a historical bibliography trace the growth of Townsend's reputation.

Numerous works by John Townsend's contemporaries are illustrated, giving a detailed look at the differences and similarities among various approaches to the same forms. New photography allows Townsend's masterpieces to be seen more accurately and richly than ever before; numerous depictions of undersides and inlays are published for the first time. [This book was originally published in 2005 and has gone out of print. This edition is a print-on-demand version of the original book.]

This book is the first to examine the life and work of John Townsend, one of the most revered cabinetmakers of Colonial America. New color photographs of all thirty-five documented Townsend pieces highlight his craftsmanship and distinctive personal style. Also featured are pieces by other members of his family and by his contemporary John Goddard, along with extensive archival materials.

Morrison H. Heckscher is Lawrence A. Fleischman Chairman of the American Wing of The Metropolitan Museum of Art.

Book Description Metropolitan Museum of Art, 2013. Condition: Good. A+ Customer service! Satisfaction Guaranteed! Book is in Used-Good condition. Pages and cover are clean and intact. Used items may not include supplementary materials such as CDs or access codes. May show signs of minor shelf wear and contain limited notes and highlighting. Seller Inventory # 0300199406-2-4

Book Description Metropolitan Museum of Art 2013-06-25, 2013. Paperback. Condition: Very Good. Item is in very good condition. If supplemental codes/CDs for textbooks are required please contact us prior to purchasing as they may be missing. Seller Inventory # DS-0300199406-2