Items related to The Gods of War: Sacred Imagery and the Decoration...

LaRocca, Donald The Gods of War: Sacred Imagery and the Decoration of Arms and Armor

The Gods of War: Sacred Imagery and the Decoration of Arms and Armor 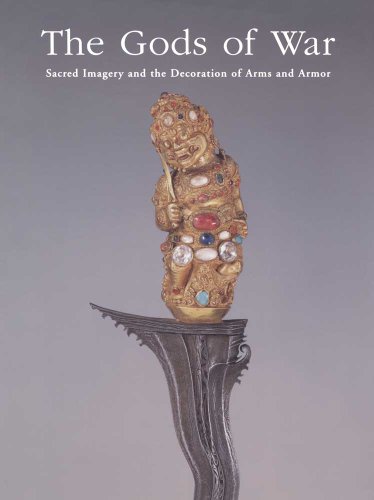 Religious beliefs have often inspired the content of artistic expression, at times supplying the themes that infuse not only the art but also the spirit of an age. Through artistic invention sacred concepts take on concrete form both in works devoted to worship and in those intended for nonreligious uses. In this regard, sacred imagery is one of the few themes, perhaps the only truly universal theme, that manifests itself in the form of ornamentation of armor and weapons from cultures around the world.

Although much of the decoration on arms and armor is simply ornamental, the inclusion of religious symbols usually imparts a specific message. Such symbolism appears in many forms, including figural depictions of particular gods, saints, and spirits, as well as religious or talismanic emblems, words, and phrases. The ornamental techniques employed vary from simple ink-block printing on fabric to elaborate embossing and chasing on copper, steel, and gold. Etching and engraving, inlay in gold and silver, and wood carving were all used to create the sacred messages that a warrior might choose to convey through his martial accouterments. These spiritually imbued arms were seen as objects of considerable importance, and sometimes of reverence, by their makers, users, and viewers. The evocative, often intricate decoration, although perhaps mysterious in form and content to us now, would have been clearly understandable and potent with meaning to its original audience. [This book was originally published in 1996 and has gone out of print. This edition is a print-on-demand version of the original book.]