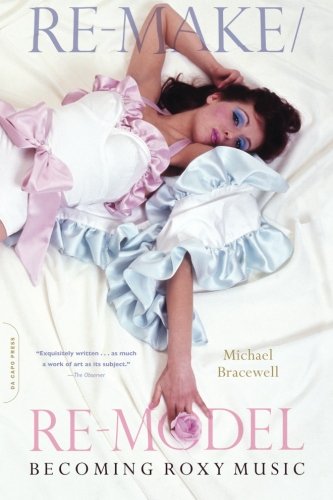 In 1972 an English rock band released its first album to instant critical acclaim: Roxy Music. Here was a group that looked as though it came not only from another era, but also from another planet-a band in which art, fashion, and music would combine to create, in Bryan Ferry's words, above all, a state of mind.” Written with the assistance, for the first time, of all those involved, including Bryan Ferry, Brian Eno, Andy Mackay, and Phil Manzanera, Re-Make/Re-Model tells how Pop Art, the 1960s underground, and Swinging London were transformed into a unique sound and look-theatrical, arch, literate, clever, sexy, thrilling. In the tradition of Jean Stein and George Plimpton's Edie, Re-Make/Re-Model is the story of extraordinary individuals and exceptional creativity-and nothing less than the history of an era in music and pop culture.

Michael Bracewell is an acclaimed novelist as well as nonfiction writer. He lives in England.

In this innovative and intelligent book, British novelist and essayist Bracewell (The Nineties: When Surface Was Depth) explores how the 1972 release of the eponymously named debut album by Roxy Music—a manifesto written in the language of heavily stylized, nuanced and atmospheric pop and rock music—was actually the culmination of a decade-long British movement in which fine art and the avant-garde met the vivacity of pop and fashion with the goal of dissolving the boundaries between high and low art forms. Bracewell describes in fascinating detail a range of famous and obscure artists, first in the fine arts departments at Newcastle and Reading universities and later in the London of the swinging '60s, and delivers in effect a history of the British pop art movement, with special praise for the influence of artist Richard Hamilton at Newcastle, with whom Roxy Music's Bryan Ferry studied. By the time Bracewell ends his look at Roxy Music at its moment of becoming, he has definitively shown how the roots of Ferry's artistic vision of the band, both as a musical group and as a pop art concept, helped him produce one of the most original groups of its time, fusing an eclectic range of influences from modern music, popular culture and fine art (Dec.)
Copyright © Reed Business Information, a division of Reed Elsevier Inc. All rights reserved.

Shipping: US$ 60.59
From United Kingdom to U.S.A.
Destination, rates & speeds