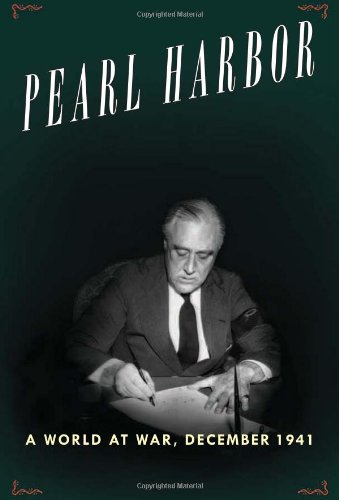 Christmas 1941 came little more than two weeks after the attack on Pearl Harbor. The shock—in some cases overseas, elation—was worldwide. While Americans attempted to go about celebrating as usual, the reality of the just-declared war was on everybody’s mind. United States troops on Wake Island were battling a Japanese landing force and, in the Philippines, losing the fight to save Luzon. In Japan, the Pearl Harbor strike force returned to Hiroshima Bay and toasted its sweeping success. Across the Atlantic, much of Europe was frozen in grim Nazi occupation.

Just three days before Christmas, Churchill surprised Roosevelt with an unprecedented trip to Washington, where they jointly lit the White House Christmas tree. As the two Allied leaders met to map out a winning wartime strategy, the most remarkable Christmas of the century played out across the globe.

Pearl Harbor Christmas is a deeply moving and inspiring story about what it was like to live through a holiday season few would ever forget.

About the Author:
Stanley Weintraub is an award-winning author and co-author of more than fifty highly acclaimed books, including Silent Night and 11 Days in December. He lives in Delaware.
Review:
“A brief but authoritative account of 11 days—Dec. 22, 1941 through Jan. 1, 1942—during which the course of the global war began to shift profoundly. [Weintraub’s] ability to meld together so many disparate elements...in such a short, swift-moving book is exemplary.” Norfolk Virginian-Pilot, 12/4/11“A fascinating account of Churchill’s history-making visit...Carefully chronicled...Contains rich anecdotal material involving the colorful prime minister...Worth reading as an account of what went on behind the scenes in the decision making that forged the strategies that led the Allies to victory.” Deseret News, 12/4/11“Weintraub gives the reader an interesting peek at different aspects of the war that would soon involve the majority of the world’s nations...Gives a unique perspective on political, military and civilian aspects of the war...Filled with candor, wit and wry sense of humor, Pearl Harbor Christmas will offer the reader a fascinating and compelling look at the events immediately following the ‘Day of Infamy.’”

Portland Book Review, December-February 2011
“[Weintraub] captures what it was like to live through one of the most infamous holiday seasons in American history...History buffs will see this as a treasured addition to their library.”
Toronto Globe & Mail, 12/3/11
“In this lively account...Weintraub gives us an America newly traumatized by its forcible engagement in a war it had resisted for two years.” Midwest Book Review, November 2011
“Succinctly captures not only the historical events, but the emotions of people at the crossroads of turbulent times. Highly recommended especially as a serious-minded addition to public library holiday shelves.”
San Diego Union-Tribune, 12/18/11
“A must-read for history buffs...Entertaining.”
Washington Post, 12/25/11“[A] compelling book...Provides a compact and vivid day-by-day account of the days following the Japanese attacks on Pearl Harbor...For political junkies, this title is chock-full of amusing observations...Weintraub’s work is an illuminating and heartwarming celebration of the 70th anniversary of Pearl Harbor.” Boston Globe, 12/25/11

Library Journal, 10/1/11“This is a more human World War II book, not of policy details, but of people trying to figure out how to proceed, with the focus on two titans of the Western Alliance (who both enjoyed a good smoke and a drink)...This stirring book is recommended for all history buffs and general readers interested in this human—and holiday—take on the war.”

WomanAroundTown.com, 11/12/11“This book is chocked full of detail, yet reads like a novel.”
Milwaukee Shepherd-Express, 11/22/11
“Pearl Harbor Christmas contains interesting vignettes from various theaters of war during December 1941...[Takes] on a fascinating month in history...A quick and smooth read.” Bookviews blog, December 2011
“The book captures the unique feeling of a nation on the brink of war and provides the an insight to the strategic planning of the two most respected politicians of the 20th century.” Roanoke Times, 11/27/11

“Until now, little has been known about the remarkable meeting of President Roosevelt and British Prime Minister Winston Churchill, together lighting the White House tree while carols were being sung.” Examiner.com, 12/7/11
“The first to portray the attack's aftermath in America, the shock, fury, uncertainty, and unity. The book also sheds new insight on FDR's and Churchill's meetings in Washington to plan strategy.”
America in WWII, December 2011
“Weintraub deftly weaves the pivotal, the noteworthy, and the curious wartime happenings that occurred in Washington when Churchill arrived...With every well-researched entry that Weintraub describes, he provides a big-picture overview of the days just before the United States entered the fray. This slim volume is well suited to fans of Churchill or Roosevelt—or to anyone who seeks a better understanding of how Pearl Harbor affected a world already at war.”
Asbury Park Sunday Press, 1/15/12“[An] interesting book...Good focus on Winston Churchill and Gen. Douglas Macarthur.”
Sacramento Book Review, February 2012
“Solid in research. Weintraub is an expert at citing and finding great sources for his historical books.”


“In readable anecdotal style, Stanley Weintraub gives us glimpses into the White House...In time of war, a nation needs heroes. And as someone said long ago, when war begins, truth is the first casualty. We also need people like Weintraub who make sure that truth survives.” King Features Syndicate, 11/16/11
“[An] exceptional piece of historical reporting about one of the defining events of the 20th century.” InfoDad.com, 12/1/11“A story of two men of very different personalities and proclivities, Pearl Harbor Christmas is also a recounting of the early days of United States entry into a war that had been going very much as the Axis powers wished. Weintraub neatly juxtaposes the smaller story of the two world leaders’ ideas and personalities with the larger one of events in the war itself.” Cleveland Plain Dealer, 12/4/11“For the World War II buff, this book may have some interest.” Richmond Times-Dispatch, 12/4/11

“A detailed yet intimate portrait of the weeks following Pearl Harbor.” Minneapolis Star-Tribune, 12/25/11“Weintraub excels at illuminating larger-than-life characters...Christmas 1941 may have been the most difficult in American history, but Weintraub describes it masterfully.” Louisville Courier-Journal, 12/23/11“A deeply moving and inspiring story about what it was like to live through a holiday season few would ever forget.” Philadelphia Tribune,12/18/11“The little known events of the era comes to light in historian Stanley Weintraub's Pearl Harbor Christmas.” Asbury Park Press, 12/25/11“A succinct but fact-filled survey of daily events from Dec. 24 to New Year Day 1942.” Sunday Missoulian, 12/25/11“The author’s ‘fly-on-the-wall’ eye for fascinating detail easily holds the reader’s interest.” Acadiana LifeStyle, December 2011

Publishers Weekly, 8/15/11
“A minor genre, the day-by-day chronicle, receives a fine addition as veteran historian Weintraub devotes a chapter each to the last 10 days of 1941 plus New Year’s Day...Dazzling detail...Readers will enjoy [Weintraub’s] opinionated portraits of the allied leaders as they hammered out strategy.” Poughkeepsie Journal, 9/4/11
“[A] compelling history of the most remarkable holiday season in the 20th century.”