Items related to The Name of the Rose

Eco, Umberto The Name of the Rose

The Name of the Rose 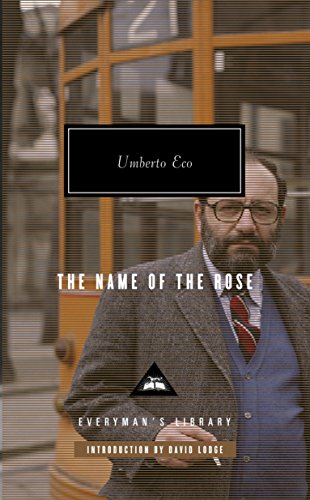 A spectacular best seller and now a classic, The Name of the Rose catapulted Umberto Eco, an Italian professor of semiotics turned novelist, to international prominence. An erudite murder mystery set in a fourteenth-century monastery, it is not only a gripping story but also a brilliant exploration of medieval philosophy, history, theology, and logic.

In 1327, Brother William of Baskerville is sent to investigate a wealthy Italian abbey whose monks are suspected of heresy. When his mission is overshadowed by seven bizarre deaths patterned on the book of Revelation, Brother William turns detective, following the trail of a conspiracy that brings him face-to-face with the abbey’s labyrinthine secrets, the subversive effects of laughter, and the medieval Inquisition. Caught in a power struggle between the emperor he serves and the pope who rules the Church, Brother William comes to see that what is at stake is larger than any mere political dispute–that his investigation is being blocked by those who fear imagination, curiosity, and the power of ideas.

The Name of the Rose offers the reader not only an ingeniously constructed mystery—complete with secret symbols and coded manuscripts—but also an unparalleled portrait of the medieval world on the brink of profound transformation.

The year is 1327. Franciscans in a wealthy Italian abbey are suspected of heresy, and Brother William of Baskerville arrives to investigate. When his delicate mission is suddenly overshadowed by seven bizarre deaths, Brother William turns detective. His tools are the logic of Aristotle, the theology of Aquinas, the empirical insights of Roger Bacon - all sharpened to a glistening edge by wry humor and a ferocious curiosity. He collects evidence, deciphers secret symbols and coded manuscripts, and digs into the eerie labyrinth of the abbey, where "the most interesting things happen at night".