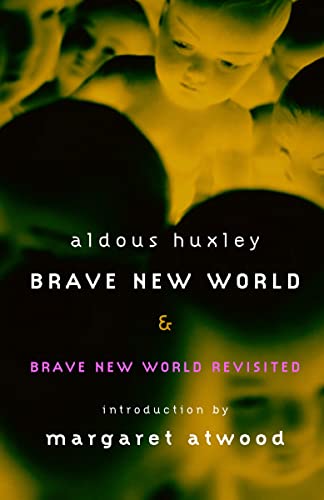 Huxley’s classic is bookended by the original introduction by Margaret Atwood and his fascinating non-fiction work, written in 1958, in which he compares the modern-day world with the dystopian fantasy he envisioned in Brave New World.

Nearly thirty years after the publication of Brave New World, Huxley checked the progress of his prophecies against reality in Brave New World Revisited and argued that many of his fictional fantasies had grown uncomfortably close to the truth. Sharing his views on issues such as overpopulation, propaganda, the art of selling and brainwashing, Huxley gives a vigorous, astute analysis of the nature of power and authority in modern society. Brave New World Revisited is an urgent and powerful appeal for the defence of individualism still alarmingly relevant today.

ALDOUS HUXLEY, born in 1894, wrote some of the most famous and enduring books of the twentieth century. His works include the classic novels Brave New World, Island, Eyeless in Gaza, and The Genius and the Goddess, as well as the nonfiction volumes The Devils of Loudun, The Doors of Perception, and The Perennial Philosophy. He died in Los Angeles in 1963.