Items related to Spell Bound (The Women of the Otherworld Series)

Armstrong, Kelley Spell Bound (The Women of the Otherworld Series)

Spell Bound (The Women of the Otherworld Series) 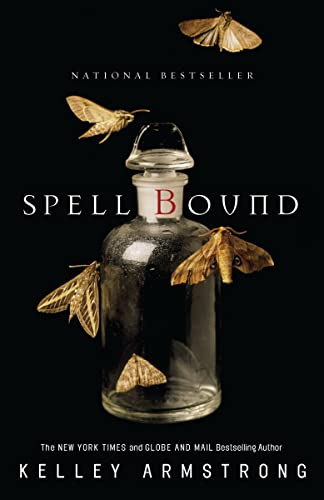 Savannah Levine is in terrible danger, and for once she’s powerless to help herself. At the conclusion of Waking the Witch, Savannah swore that she would give up her powers if it would help a young girl. Little did she know that someone would take her up on that promise.

And now, witch hunting assassins, necromancers, half-demons, and rogue witches all seem to be after her. The threat is not just for Savannah; every member of the Otherworld might be at risk. While most of her fellow supernaturals are circling the wagons at a gathering of the council in Miami, Savannah is caught on the road, isolated from those who can protect her and unable to use her vast spell casting talent, the thing she counts on most. In a story that will change the shape of the Otherworld forever, Spell Bound gathers Elena, Clay, Paige, Lucas, Jaime, Hope, and others, who soon learn that the greatest threat to supernaturals just may come from within.

Book 12 in the Otherworld series.

KELLEY ARMSTRONG is the internationally bestselling author of Omens and Visions, the first two books in her Cainsville series, the 13-book Women of the Otherworld series and the Nadia Stafford crime novels. She is also the author of the #1 New York Times bestselling young adult trilogies, Darkest Powers and Darkness Rising, and Sea of Shadows, the acclaimed first novel in her newest YA fantasy series.

Sitting g cross-legged on my motel bed in the dark, I cast my light-ball spell for the twentieth time. As I recited the incantation, I waited for the mental click that told me it had worked. When that didn’t come, I opened my eyes, still expecting to see the glowing ball floating over my fingers. It didn’t matter that I hadn’t seen it the first nineteen times. It was a damned light-ball spell, so simple I usually didn’t even need to finish the incantation before it worked.

On a chair by the bed, Adam mumbled and shifted in his sleep. Adam Vasic, Exustio half-demon, the guy I’d been in love with since I was twelve, now my best friend. He’d followed me when I took off in a tantrum of guilt and grief, snuck into my motel room, and quietly fell asleep.

He was close to waking now, and even my whispered incantations had him fussing. He needed sleep, not more of my angst, so I slid from the room.

I stepped outside. It was a wet spring night, the earlier storm gone, whipping winds and a bone-chilling cold left behind. I walked over to Adam’s Jeep, parked beside my vintage Triumph motorcycle. I peered through the back of his vehicle, in case I’d left a sweater there. All I could see was his duffel bag, and I didn’t want to break in and go through his stuff, which was proof that I really wasn’t myself tonight.

A soda machine glowed across the motel lot. I wasn’t thirsty, but I had change in my pocket and it gave me a destination. After sloshing through one puddle in the dark, I didn’t bother trying to avoid the rest, just trudged along, icy water soaking my sneakers. When gravel crackled to my left, I spun and spotted a shape darting behind the motel. Which reminded me . . . Besides losing my powers, I was also the target of a witch-hunter. Apparently she’d found me again.

I glanced toward my room. I should get Adam. Without my spells, I was—

Powerless? Hardly. I was six feet tall and in great shape. The witch-hunter was a scrawny mouse of a girl, barely an adult, barely five-foot-five, with no apparent supernatural powers. I took another step, careful now, and instinctively started whispering a sensing spell under my breath. Then I stopped. Do it the old-fashioned way. Look and listen.

I did, but couldn’t hear anything. Peering around the corner didn’t help. Then gravel crunched overhead.

On the roof. A trick she’d pulled before. I should have been prepared.

I looked around. There had to be a fire escape or trash bins I could climb—

A loud noise sent me spinning, back to the wall, hands lifted for a spell. Tires squealed as a car roared past the motel.

I looked down at my fingers, still outstretched, ready to cast. I inhaled sharply and clenched my fists.

What if she did have a gun? Sure, I knew some martial arts, but I was no black belt. I’d learned grudgingly, knowing my spells were better than any roundhouse kick.

I’d love to bring this kid down on my own, but the important thing was to stop her before she targeted another witch. Time to get backup.

I was two doors from my room when a hand clamped on my shoulder. I spun, fingers flying up in a useless knockback spell. It was a man, a huge guy, at least three hundred pounds and a few inches taller than me. Beard stubble covered his fleshy face. He smelled like he’d showered in Jack Daniel’s.

He grabbed my arm and yanked me, his other arm going around my waist as he pulled me against him. I froze. Just froze, my brain stuttering through all the spells I couldn’t cast, refusing to offer any alternatives.

Adam walked over, hands at his sides, fingers glowing faintly, gaze fixed on the man. I snapped to my senses and elbow-jabbed the guy, who fell back, whining, “I just wanted a dollar.”

Adam is my height and well built, but he’s no muscle-bound bruiser. Still the guy shrunk, then slithered off to his room. “Well, that was humiliating,” I said. “Tell you what, I’ll buy that new top for your Jeep if you promise never to tell anyone you rescued me from a drunk asking for spare change.”

He didn’t smile. Just studied me, then said, “Let’s get inside.”

“Can’t. My little witch-hunter has returned. She’s up on the roof. I was just coming in to get you for backup.”

That gave him pause, but he only nodded, then peered up at the dark rooftop. “I’ll go around the rear and climb up. You cover the front.”

I should have warned him that I was spell-free. I really should have. I didn’t.

A few minutes later, gravel crunched on the roof again and I tensed, but it was only Adam. He walked to the front, hunkered down, and motioned me over.

“Is there a flashlight in the Jeep?” I asked. “That’d be easier.”

“Sure.” He dropped the keys into my hand. “Glove box.”
From the Hardcover edition.