Items related to Days of Destruction, Days of Revolt

Days of Destruction, Days of Revolt 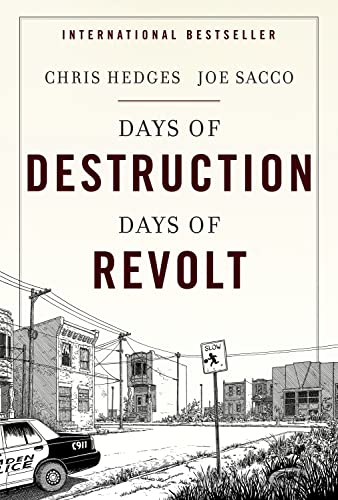 With illustrations by award-winning comic artist Joe Sacco, Chris Hedges portrays a suffering nation on the cusp of widespread revolt and addresses Occupy Wall Street in his first book since the international protests began.

In the tradition of Let Us Now Praise Famous Men, Hedges and Sacco travel to the depressed pockets of the United States to report on recession-era America. What they find in Camden, New Jersey, the devastated coalmines of West Virginia, on the Lakota reservation in South Dakota, and in undocumented farmworker colonies in California is a thriving neofeudalism. With extraordinary on-the-ground reportage and illustration, Days of Destruction, Days of Revolt provides a terrifying glimpse of a future for America and the nations that follow her lead--a future that will be avoided with nothing short of revolution.

Amazon Best Books of the Month, June 2012: From the dusty plains of North Dakota to the coal-veined hills of West Virginia to the desolate and ravaged streets of Camden N.J., Pulitzer Prize winner Chris Hedges and award-winning cartoonist/journalist Joe Sacco introduce us to the nation's "sacrifice zones"--those regions where, in the authors' view, corporate greed has run wild, and the locals have suffered. A unique mashup of investigative journalism, man-on-the-street reportage, graphic novel, and anti-corporate manifesto, the result is a riveting and often chilling account of America's forgotten zones. The balance between Hedges' narrative nonfiction storytelling and Sacco's intimate and very human sketches is surprisingly effective. And the stark depictions (both written and visual) of abandoned coal mines and empty downtowns and crumbling houses are heartbreaking, as are the stories of people struggling to survive. This is a special and important book. --Neal Thompson

Chris Hedges, a senior fellow at The Nation Institute and a Truthdig columnist, is a Pulitzer Prize-winning author and journalist. His books include such bestsellers as Empire of Illusion, Death of the Liberal Class and the National Book Award finalist War Is a Force That Gives Us Meaning. He lives in Princeton, New Jersey.

1. Days of Destruction, Days of Revolt