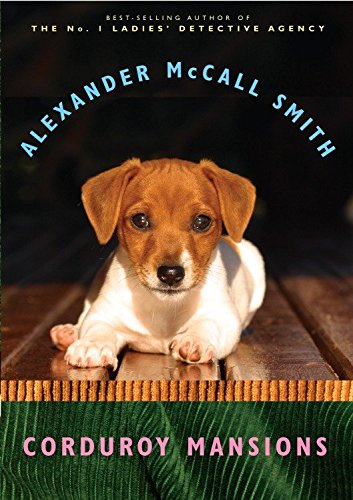 In the Corduroy Mansions series of novels, set in London’s hip Pimlico neighborhood, we meet a cast of charming eccentrics, including perhaps the world’s most clever terrier, who make their home in a handsome, though slightly dilapidated, apartment block.

Corduroy Mansions is the affectionate nickname given to a genteel, crumbling mansion block in London’s vibrant Pimlico neighborhood and the home turf of a captivating collection of quirky and altogether McCall-Smithian characters. There’s the middle-aged wine merchant William, who’s trying to convince his reluctant twenty-four-year-old son, Eddie, to leave the nest; and Marcia, the boutique caterer who has her sights set on William. There’s also the (justifiably) much-loathed Member of Parliament Oedipus Snark; his mother, Berthea, who’s writing his biography and hating every minute of it; and his long-suffering girlfriend, Barbara, a literary agent who would like to be his wife (but, then, she’d like to be almost anyone’s wife). There’s the vitamin evangelist, the psychoanalyst, the art student with a puzzling boyfriend and Freddie de la Hay, the Pimlico terrier who insists on wearing a seat belt and is almost certainly the only avowed vegetarian canine in London.

Filled with the ins and outs of neighborliness in all its unexpected variations, Corduroy Mansions showcases the life, laughter and humanity that have become the hallmarks of Alexander McCall Smith’s work.

When I started writing serial novels in newspapers six years ago, I had no idea that the whole business would rapidly become addictive. My initial foray into this genre of fiction began after a conversation with Armistead Maupin, author of Tales of the City, which was a saga of life in San Francisco that ran to several volumes. The idea was implanted of starting a daily novel set in Edinburgh, and a few months later I embarked on 44 Scotland Street. After five years of producing a chapter a day for six months of the year, I decided to give Edinburgh a rest for a while and start a tale set in London. Corduroy Mansions, published each day in the online edition of The Daily Telegraph, was the result.

Like any saga, there is a story--but it is not a complicated one. These stories are character-based: what interests me is what makes the characters tick rather than intricate and potentially confusing plots.

There are quite a lot of characters in the story, many of them occupying a rather run-down block of flats in Pimlico that gives its name to the series. We are introduced to William French, a wine merchant who has just turned fifty, but who is in denial about that. He is a widower with a dreadful son, Eddie, who sees no reason to leave a comfortable home and set up independently, in spite of every encouragement by his father. William is admired by Marcia, a caterer who would like to marry him--or anybody really.

William lives at the top of the building. On the floor below is a shared flat lived in by four young women. One of these, Dee, runs a vitamin and health food shop not far away and is a keen exponent of alternative medicine in its various guises, and in particular of colonic irrigation. Then there is Caroline, who is studying for a master’s degree in fine art at the Sotheby’s Institute of Art.

Caroline is fond of James, who is doing the same course as she is. James is very artistic, with a particular interest in the work of the French artist, Nicolas Poussin. James likes Caroline a great deal, but is unsure as to what his real proclivities are. Caroline is optimistic that she can confirm him in the direction she would like him to take, that is as one who is interested in women, but will she succeed?

William, at least, is quite unambiguous in that department: he wants to find a woman. His long-time friend Marcia, however, thinks she just may be his match. In the meantime, William has for company a remarkable dog, Freddie de la Hay, a Pimlico Terrier.

Then there is Oedipus Snark, a Liberal Democrat MP. He is so unpleasant that his mother, Berthea Snark, is writing his unauthorized biography in which she has the intention of dishing every bit of dirt on her son that she can muster. Berthea is the sister of the mystically-inclined Terence Moongrove, an exponent of Bulgarian sacred dance and the unexpected driver of a Porsche.

That is probably all that one needs to know. But even if one cannot be bothered to absorb even those few facts, the story will, I hope, be abundantly clear. This is light social comedy, I suppose, but while I admit that the whole point of the exercise is for the reader to have fun, I hope in this story, nonetheless, to say something about how we live and about how finding love and meaning in the very small things of life may transform us, may make our ordinary lives more bearable.

Corduroy Mansions is the nickname given to London's vibrant Pimlico neighborhood, home to a captivating collection of quirky and altogether "McCall-Smithian" characters. Middle-aged wine merchant William is trying to convince his reluctant 24-year-old son, Eddie, to leave the nest. Marcia, the boutique caterer, has her sights set on William. There's the much-loathed parliamentarian Oedipus Snark, whose mother is writing his biography and hating every minute of it -- and Snark's long-suffering girlfriend, a literary agent who would like to be his wife. There's the vitamin evangelist, the psychoanalyst, the art student, and then there's Freddie de la Hay, the terrier who insists on wearing a seat belt and is probably the only vegetarian canine in London.