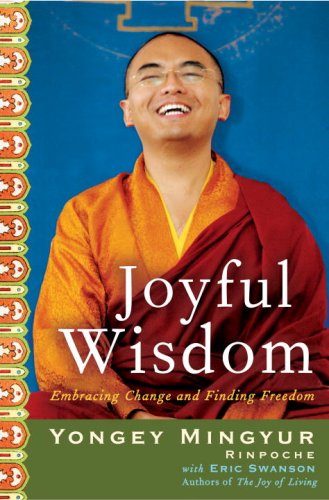 Yongey Mingyur is one of the most celebrated among the new generation of Tibetan meditation masters, whose teachings have touched people of all faiths around the world. His first book, The Joy of Living, was a New York Times bestseller hailed as “compelling, readable, and informed” (Buddhadharma) and praised by Richard Gere, Lou Reed, and Julian Schnabel for its clarity, wit, and unique insight into the relationship between science and Buddhism.

His new book, Joyful Wisdom, addresses the timely and timeless problem of anxiety in our everyday lives. “From the 2,500-year-old perspective of Buddhism,” Yongey Mingyur writes, “every chapter in human history could be described as an ‘age of anxiety.’ The anxiety we feel now has been part of the human condition for centuries.” So what do we do? Escape or succumb? Both routes inevitably lead to more complications and problems in our lives. “Buddhism,” he says, “offers a third option. We can look directly at the disturbing emotions and other problems we experience in our lives as stepping-stones to freedom. Instead of rejecting them or surrendering to them, we can befriend them, working through them to reach an enduring authentic experience of our inherent wisdom, confidence, clarity, and joy.”

Divided into three parts like a traditional Buddhist text, Joyful Wisdom identifies the sources of our unease, describes methods of meditation that enable us to transform our experience into deeper insight, and applies these methods to common emotional, physical, and personal problems. The result is a work at once wise, anecdotal, funny, informed, and graced with the author’s irresistible charm.

Yongey Mingyur Rinpoche, celebrated Tibetan Buddhist master and author of the internationally acclaimed The Joy of Living, is deeply versed in the practical and philosophical disciplines of the ancient tradition of Tibetan Buddhism. He is perhaps best known for his accessible style, his self-deprecating humor, and his ability to address human weakness with deeply personal understanding and compassion. For more information about Yongey Mingyur, his teachings, and his activities around the world, visit www.mingyur.org.

Eric Swanson is coauthor of The Joy of Living. A graduate of Yale University and the Juilliard School, he is the author of the novels The Greenhouse Effect and The Boy in the Lake. After converting to Buddhism in 1995, he cowrote Karmapa, The Sacred Prophecy and authored What the Lotus Said, both of which focus on Buddhism within Tibet.

Shipping: US$ 8.88
From United Kingdom to U.S.A.
Destination, rates & speeds