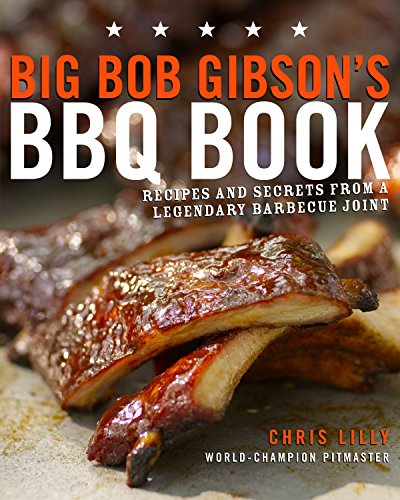 Winners of the World Championship BBQ Cook-Off for six years in a row and with hundreds of other contest ribbons as well, nobody does barbecue better than Big Bob Gibson Bar-B-Q in Decatur, Alabama. Chris Lilly, executive chef of Big Bob Gibson Bar-B-Q and great-grandson-in-law of Big Bob himself, now passes on the family secrets in this quintessential guide to barbecue.

From dry rubs to glazes and from sauces to slathers, Lilly gives the lowdown on Big Bob Gibson Bar-B-Q's award-winning seasonings and combinations. You?ll learn the unique flavors of different woods and you?ll get insider tips on creating the right heat?be it in a charcoal grill, home oven, or backyard ground pit. Then, get the scoop on pulled pork, smoked beef brisket, pit-fired poultry, and, of course, ribs.

People raised in Decatur, Alabama, know that barbecue sauce is supposed to be white. For more than eighty years Big Bob Gibson’s has been dunking its golden-brown birds, fifty at a time, into a vat of this tangy, peppery white sauce. The steaming, glistening chickens are then cut to order for our customers.

For years and years the restaurant’s early-morning cooks closely guarded the white sauce recipe, which was made each day before the day shift arrived. However, even without doing the math, I can tell you that hundreds of cooks have passed through the pitrooms of Big Bob Gibson Bar-B-Q, so I don’t think you can describe this recipe as “closely guarded” anymore.

I do know that Big Bob’s techniques and recipes, including his white sauce, have influenced the flavors of regional barbecue in Alabama. The great thing about passing secrets is that every time they are shared they change slightly. There is now a large number of “authentic” versions of Big Bob’s original secret recipe and cooking method—all different from one another. This is one of my favorite examples.

Book Description 2009. Paperback. Condition: New. Paperback. Winners of the World Championship BBQ Cook-Off for six years in a row and with hundreds of other contest ribbons as well, nobody does barbecue better than Big Bob Gibson Bar-B.Shipping may be from our Sydney, NSW warehouse or from our UK or US warehouse, depending on stock availability. 255 pages. 0.512. Seller Inventory # 9780307408112