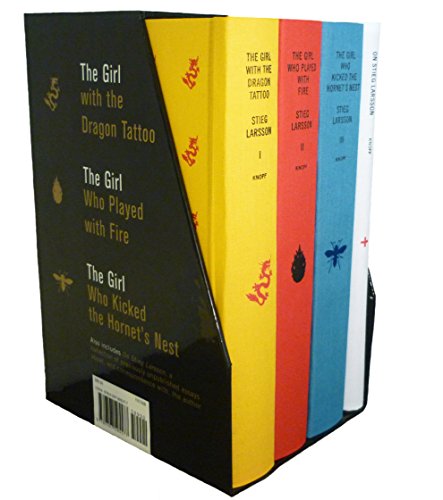 Readers all across America are talking about Stieg Larsson’s #1 best-selling trilogy—The Girl with the Dragon Tattoo, The Girl Who Played with Fire, and The Girl Who Kicked the Hornet’s Nest—which has more than 12 million copies in print.

Now, just in time for the holidays: a deluxe, slip-cased set of the three hardcover novels—each unjacketed, bound in full cloth and uniquely stamped, with maps and individual full-color endpapers—as well as On Stieg Larsson, a previously unpublished collection of essays about and correspondence with the author.

The perfect collectible for the Stieg Larsson fan and the ideal gift for those who have yet to meet his heroine, Lisbeth Salander, “one of the most fascinating characters in modern genre fiction” (San Francisco Chronicle).

Get to know the bestselling series that Amazon (and its customers) have loved from the very beginning with this deluxe, slip-cased set of all three hardcover books in the Millennium Trilogy, along with On Stieg Larsson, a never-before-published collection of reflections about and correspondence with the author. Read our reviews of the books:

Amazon Best of the Month, September 2008: Once you start The Girl with the Dragon Tattoo, there's no turning back. This debut thriller--the first in a trilogy from the late Stieg Larsson--is a serious page-turner rivaling the best of Charlie Huston and Michael Connelly. Mikael Blomkvist, a once-respected financial journalist, watches his professional life rapidly crumble around him. Prospects appear bleak until an unexpected (and unsettling) offer to resurrect his name is extended by an old-school titan of Swedish industry. The catch--and there's always a catch--is that Blomkvist must first spend a year researching a mysterious disappearance that has remained unsolved for nearly four decades. With few other options, he accepts and enlists the help of investigator Lisbeth Salander, a misunderstood genius with a cache of authority issues. Little is as it seems in Larsson's novel, but there is at least one constant: you really don't want to mess with the girl with the dragon tattoo.

Amazon Best of the Month, July 2009: The girl with the dragon tattoo is back. Stieg Larsson's seething heroine, Lisbeth Salander, once again finds herself paired with journalist Mikael Blomkvist on the trail of a sinister criminal enterprise. Only this time, Lisbeth must return to the darkness of her own past (more specifically, an event coldly known as "All the Evil") if she is to stay one step ahead--and alive. The Girl Who Played with Fire is a break-out-in-a-cold-sweat thriller that crackles with stunning twists and dismisses any talk of a sophomore slump. Fans of Larsson's prior work will find even more to love here, and readers who do not find their hearts racing within the first five pages may want to confirm they still have a pulse. Expect healthy doses of murder, betrayal, and deceit, as well as enough espresso drinks to fuel downtown Seattle for months.

Amazon Best Books of the Month, May 2010 As the finale to Stieg Larsson's Millennium Trilogy, The Girl Who Kicked the Hornet's Nest is not content to merely match the adrenaline-charged pace that made international bestsellers out of The Girl with the Dragon Tattoo and The Girl Who Played with Fire. Instead, it roars with an explosive storyline that blows the doors off the series and announces that the very best has been saved for last. A familiar evil lies in wait for Lisbeth Salander, but this time, she must do more than confront the miscreants of her past; she must destroy them. Much to her chagrin, survival requires her to place a great deal of faith in journalist Mikael Blomkvist and trust his judgment when the stakes are highest. To reveal more of the plot would be criminal, as Larsson's mastery of the unexpected is why millions have fallen hard for his work. But rest assured that the odds are again stacked, the challenges personal, and the action fraught with neck-snapping revelations in this snarling conclusion to a thrilling triad. This closing chapter to The Girl's pursuit of justice is guaranteed to leave readers both satisfied and saddened once the final page has been turned.

Stieg Larsson, who lived in Sweden, was the editor in chief of the magazine Expo and a leading expert on antidemocratic, right-wing extremist and Nazi organizations. He died in 2004, shortly after delivering the manuscripts for The Girl with the Dragon Tattoo, The Girl Who Played with Fire, and The Girl Who Kicked the Hornet’s Nest.

The Millennium Trilogy: Deluxe Boxed Edition: The Girl With the Dragon Tattoo. The Girl who Played with Fire. The Girl Who Kicked the Hornet's Nest. On Stieg Larsson

Book Description Hardcover. Condition: New. Deluxe Edition. New. The black shiny slip case has a little tear at each of the top corners. On Stieg Larsson has two small lightly soiled spots at the top edge of the front board near the spine. First U.S. Edition. Size: 8vo - over 7ľ" - 9ľ" tall. Fiction. Seller Inventory # 047133

Book Description Hardcover. Condition: New. 1st Edition. Mint condition.Knopf Publishing,2010.First US edition-first printing of this revised boxed deluxe edition.Four pictorial hardcovers(black lettering to the spine)with illustrated black slipcase,both in mint condition,no Dj as issued.Illustrated with colour,b/w maps,drawing. This boxset also includes on Stieg Larsson a collection of previously unpublished essays about, and correspondence with, the author.576pp(total of pages) including The Vanger Family Tree,notes.Translated from the Swedish by Reg Keeland.Heavy set(approx 3.1 Kg). The box set is new and sealed. This is another paragraph About the Author: Stieg Larsson, who lived in Sweden, was the editor in chief of the magazine Expo and a leading expert on antidemocratic, right-wing extremist and Nazi organizations. He died in 2004, shortly after delivering the manuscripts for The Girl with the Dragon Tattoo, The Girl Who Played with Fire, and The Girl Who Kicked the Hornet s Nest. Seller Inventory # 4752

Shipping: US$ 28.96
From United Kingdom to U.S.A.
Destination, rates & speeds