Items related to Adventures: The Three Musketeers; King Arthur and His...

Adventures: The Three Musketeers; King Arthur and His Knights of the Round Table; The Adventures of Robin Hood; Treasure Island (Everyman's Library Children's Classics Series) 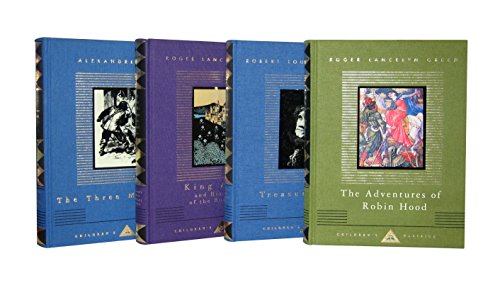 Alexandre Dumas (1802–1870) lived a life as romantic as that depicted in his famous novels. He was born in Villers-Cotterêts, France. His early education was scanty, but his beautiful handwriting secured him a position in Paris in 1822 with the du’Orléans, where he read voraciously and began to write. His first play, Henri III et sa cour (1829), scored a resounding success for its author and the romantic movement. His lavish spending and flamboyant habits led to the construction of his fabulous Château de Monte-Cristo, and in 1851 he fled to Belgium to escape creditors. Dumas’s overall literary output reached more than 277 volumes, but his brilliant historical novels made him the most universally read of all French novelists. With collaborators, mainly Auguste Maquet, Dumas wrote such works as The Three Musketeers (1843–1844); its sequels, Twenty Years After (1845) and the great mystery The Man in the Iron Mask (1845–1850); and The Count of Monte Cristo (1844). His work ignored historical accuracy, psychology, and analysis, but it’s thrilling adventure and exuberant inventiveness continued to delight readers, and Dumas remains one of the prodigies of nineteenth-century French literature.

Roger Lancelyn Green (1918–1987) was a biographer of children’s writers and a reteller of myths, legends, and fairy tales. He was a member of the Oxford literary group the Inklings, along with J. R. R. Tolkien and C. S. Lewis.

Robert Louis Stevenson (1850–1894) was a Scottish novelist, poet, essayist, and travel writer who spent the last part of his life in the Samoan islands. His best-known books include Treasure Island, Kidnapped, The Master of Ballantrae, and Dr. Jekyll and Mr. Hyde.

1. Adventures: The Three Musketeers; King Arthur and His Knights of the Round Table; The Adventures of Robin Hood; Treasure Island

Book Description Everyman's Library 2010-12-21, 2010. Hardcover. Condition: Very Good. Item is in very good condition. If supplemental codes/CDs for textbooks are required please contact us prior to purchasing as they may be missing. Seller Inventory # DS-0307700712-2

2. Adventures: The Three Musketeers; King Arthur and His Knights of the Round Table; The Adventures of Robin Hood; Treasure Island