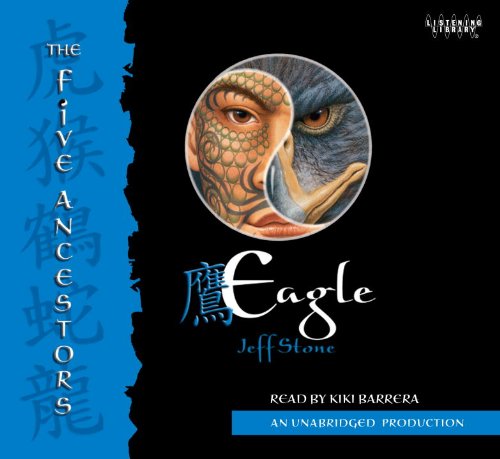 For year, Ying hated his grandmaster for denying him the opportunity to train as a Dragon, and held a deep resentment for his five younger brothers–grandmaster’s favorites. He took his revenge and burnt the Cangzhen temple to the ground, but the five youngsters survived and continue to be a thorn in his side. Yet, when betrayed by the emperor and imprisoned, it was his younger sister, Hok, who rescued him. Now Ying begins to realize that Tonglong has been manipulating him for a long time. Ying needs to figure out who are his friends and who are his enemies . . .and he needs to figure it out fast!
From the Hardcover edition.

Jeff Stone practices the martial arts daily. He has worked as a photographer, an editor, a maintenance man, a technical writer, a ballroom dance instructor, a concert promoter, and a marketing director for companies that design schools, libraries, and skateboard parks. Like the heroes of The Five Ancestors series, Mr. Stone was adopted when he was an infant. He began searching for his birthmother when he was 18; he found her 15 years later. The author lives with his wife and two children in Carmel, IN.
From the Hardcover edition.

Sixteen-year-old Ying shoved his former sister, Hok, to the ground with all his might.He saw her eyes widen as a qiang ball whistled over her head. Ying’s carved face twisted into an angry scowl. How many times was he going to have to save her life tonight? He turned and slammed the door closed on the burning arena of the Jinan Fight Club.

Inside the club’s main tunnel, Ying’s eyes quickly adjusted to the orange-yellow glow of torches lining the stone-walled corridor. He glanced down at Hok and, next to her, Seh. Through the smoke drifting in from under the door, Ying saw that Hok held a tiny jade crane in one hand and Malao’s ornate monkey stick in the other. Both were trophies from her time in the pit arena.

In his own hands, Ying held his long chain whip and a ring of keys he’d just taken from LaoShu, the qiang-wielding fight club owner. LaoShu screamed suddenly on the other side of the door, and Ying heard roof timbers crash down. The ground and walls shook, and Ying knew that LaoShu–the Rat–would give them no more trouble.

Ying spat and pivoted away from the door, ignoring the pain of cracked ribs and weeks-old bone bruises. The nagging injuries were his trophies, presented to him in prison by General Tsung almost a month before. Ying wrapped his chain whip around his waist and groaned. He grabbed the collar of Hok’s dress, yanking her to her feet.

“Move!” Ying hissed, pointing down the corridor. He looked at his former brother Seh. “You too.”

Hok took a step forward, but Seh didn’t react. He just stared at Ying, blank-faced. What is wrong with Seh? Ying wondered. He reached out to slap some sense into him, but Hok grabbed his arm.

Ying shrugged. “Suit yourself.” He spun around and walked quickly down the tunnel corridor, the rough cotton robe of his Pit Cleaner disguise chafing his beaten flesh.

“Ying, wait,” Hok said. She took Seh by the arm and hurried after Ying. Ying slowed for a moment, scanning the corridor. He saw no sign of guards ahead. They must have cleared out after the fire began. Ying glanced back and saw Hok and Seh catching up. They looked like a pair of children whose dress-up tea party had ended in a fistfight. Hok’s elegant silk dress was torn in several places and bloodstained from her fierce battle with General Tsung in the pit arena. Seh’s simple gray robe was covered in dirt and splotches of who knows what else from rolling along the pitarena floor en route to this tunnel.

Ying began to walk again. Hok and Seh remained on his tail.

“Why are you helping us?”Hok soon asked in a low voice.

“You got me out of that prison back in Kaifeng,”

Ying replied. “I am returning the favor.”

“You already met your end of our bargain,”Hok said.

“You gave me information that helped me find Malao.”

Ying scoffed.“Maybe you would consider information an equal trade for someone’s life, but I do not. My injuries were too great for me to have survived much longer there.You saved my life, and I am honor-bound to return the favor.”

“But how did you know we would be here in Jinan, at the fight club?”Hok asked.

“I didn’t come to Jinan looking for you,” Ying replied. “I came looking for Tonglong. I have a score to settle with him, and he frequents the fight clubs. I saw you and Seh standing in line outside with the round eye. I assumed you were up to something, and also assumed you would fail. I saw this as an opportunity to repay my debt.”

Ying rounded a corner. Ahead of him were rows of holding cells for prisoners who were scheduled to fight that night. All of the cells were empty save two. Inside one sat Fu. Malao was in the other.

Fu roared when he saw Ying, but Malao began to shriek, “Ying! Ying!”

One of Malao’s shoulders was bloodstained, and he had a huge lump on the side of his head. Ying ignored him.

“What are you doing here?” Malao asked. “Are those keys in your hand?”
Ying hurried past without acknowledging him. He picked up his pace.

“Ying, wait!”Malao wailed. “Come back!” Ying glanced over his shoulder and saw Hok heading toward the cells with Seh.

“Sorry,” Ying said, turning away. “I need the keys for the exit door.”

“Let them out first,”Hok said. “No,” Ying said. “There are too many keys on this ring. By the time I figure out which ones will open their cells, we could be dead from smoke or something else. I won’t risk it.”

“I am not leaving here without Fu and Malao,”Hok said.

“Then my debt has been repaid,”Ying said. “Goodbye.”

Ying rounded another corner and began to run. Foolish children, he thought. Don’t know when to cut their losses.

Ying reached the end of the next passageway and came to a halt. The tunnel split in two directions. One way led to a set of stairs that went up to the fight club, while the other corridor sloped gently upward toward a ground-level exit door. If he were to encounter any guards or others fleeing the burning fight club, this would be the place.

Ying squeezed the key ring tight so it wouldn’t jingle and peered around the corner. Smoke was streaming toward the exit. That meant the exit door was open, sucking the smoke toward it.

Down the corridor in the direction of the exit, he heard footsteps. Someone coughed. “I can’t believe we’re being sent back in here,” a man said. “We should just wait by the exit door. It’s the only way out for those kids.”
From the Hardcover edition.