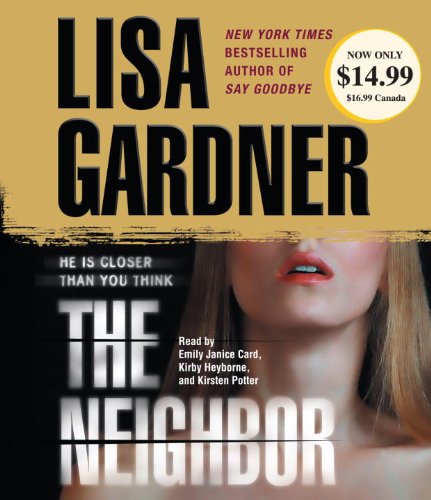 A young mother, blond and pretty, vanishes from her South Boston home, leaving behind only one witness—her four-year-old daughter—and one suspect—her handsome, secretive husband.

From the moment Detective Sergeant D. D. Warren arrives at the Joneses’ snug little bungalow, instinct tells her that something is seriously off with the wholesome image the couple has worked so hard to create.

With the clock ticking on the life of a missing woman and a media firestorm building, D.D. must decide whether Jason Jones is hiding his guilt—or just trying to hide. But first she must stand between a potential killer and his next victim—an innocent child who may have seen too much.

Book Description
From a master of suspense comes a chilling new novel that explores the dangers lurking closer than you think. Because even in the perfect family, you never know what is going on behind closed doors...


This is what happened...

It was a case guaranteed to spark a media feeding frenzy--a young mother, blond and pretty, disappears without a trace from her South Boston home, leaving behind her four-year-old daughter as the only witness and her handsome, secretive husband as the prime suspect.

In the last six hours...

But from the moment Detective Sergeant D. D. Warren arrives at the Joneses’ snug little bungalow, she senses something off about the picture of wholesome normality the couple worked so hard to create. On the surface, Jason and Sandra Jones are like any other hardworking young couple raising a four-year-old child. But it is just under the surface that things grew murky.

With the clock ticking on the life of a missing woman and the media firestorm building, Jason Jones seems more intent on destroying evidence and isolating his daughter than on searching for his “beloved” wife. Is the perfect husband trying to hide his guilt--or just trying to hide? And will the only witness to the crime be the killer’s next victim?

Amazon Exclusive: Lisa Gardner on the Making of The Neighbor

A dozen suspense novels later, it still amazes me how little control I have over the writing process. I’m a plotter. That means each time I start a novel, I feel compelled to map out the road ahead. I’m going to write a very scary book where lots of people die, and this is how I’m gonna do it. Sounds good. And yet, each and every time, by page five or so, that plan is blown out of the water. The plot veers off in a different direction. A character throws me for a loop. I don’t know. You go to write a book and apparently, things happen.


My latest release, The Neighbor is no exception. I started the book with a simple premise: I wanted a love interest for one of my favorite characters, hard-nosed Boston detective, D.D. Warren. How much fun would it be, I wondered, if D.D. fell for a guy suspected of murdering his own wife? Better yet, I’ll make the guy a father of a four-year-old girl, because surely workaholic Sergeant Warren deserves a sexy, dark-haired man who also knows how to fashion pigtails and make Mickey Mouse pancakes. Perfect!

Of course, I wanted a twisted storyline with lots of shocking turns. Not a problem. Most of my novels have been inspired by true crimes, and let’s face it, there are no shortages of husbands currently resolving their marital woes by killing off their wives. Research cases were numerous and easy to find. If I now sleep with one eye open, well that’s what happens when you spend six months immersed in the study of spousal homicide.

Next, I needed some other suspects to stir the pot. What about a registered sex offender living on the same block as the missing woman? And what if the missing woman happens to also be a beautiful blonde schoolteacher, perhaps a natural favorite with her male students? See, now we’re having some fun. Add half a dozen deep dark secrets and we’re off to the races.

This also led to more interesting research. I thought I knew what I needed to know about sex offenders. As wife and mother, I’ve been very comfortable with the notion of shooting first and questioning later. I’ve also had zero respect for female schoolteachers who engage in sexual relations with their students. A sex offender is a sex offender, even the ones who are pretty and female. Then again, sometimes during the research phase, I learn things that totally change the course of the novel.

I started The Neighbor with a plan, and quickly ended up with a puzzle. At a certain point, I was writing the book simply so I could find out what was going to happen next. Did Jason Jones actually kill his wife? What was he doing on the computer night after night? And what about poor four-year old Ree, the last known person to have seen her mother alive?

I thought D.D. Warren needed to a love interest. But maybe, what she really needs is to save a scared little girl, caught in the middle of a deadly game.

It’s possible there’s a bit more to the story than I’ve mentioned so far. Some other key characters that appear along the way, some rather unexpected developments. Because when you go to write a book, apparently, things happen. --Lisa Gardner

Lisa Gardner is the New York Times bestselling author of The Neighbor, Say Goodbye, Hide, Gone, Alone, The Killing Hour, The Survivors Club, The Next Accident, The Other Daughter, The Third Victim, and The Perfect Husband. She lives with her family in New England, where she is at work on her next suspense novel, Live to Tell, which Bantam will publish Summer 2010.