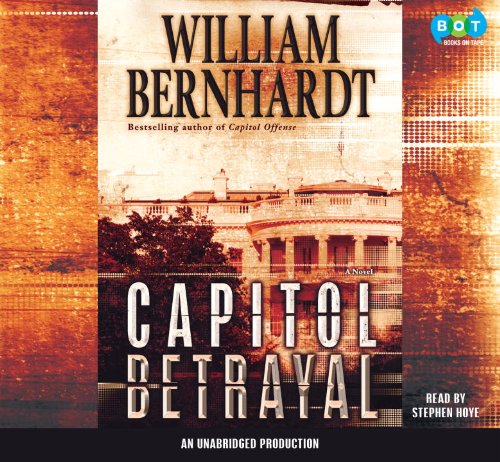 William Bernhardt’s bestselling novels explore politics, power, ambition, crime, and the law. Now he scales new heights of suspense as, in one harrowing day, lawyer and former senator Ben Kincaid enters the eye of an international storm, a crisis with consequences beyond calculation.

Kincaid is in a meeting with the president in the Oval Office when Washington suddenly explodes into chaos. Facing an imminent threat to the White House, Kincaid is whisked, along with the president and his advisors, to the underground PEOC—Presidential Emergency Operations Center—built to withstand a nuclear blast, but vulnerable to another kind of attack.

Inside the bunker, defense specialists realize that a malevolent foreign dictator has hacked into the U.S. nuclear defense system and now has a finger on the trigger of America’s most dangerous weapons. The dictator’s message is clear: Heed his demands or suffer unfathomable destruction.

Forced to make critical, split-second decisions, the president seems to be falling apart under the pressure. The vice president wants to strip him of his powers—a move that could have a disastrous impact on national defense. But even during this time of upheaval, in order for the president to be removed, there must be a trial. With the clock winding down, Kincaid has precious little time to defend the president.

Two sides of one unforgettable story, McKay and Kincaid home in on their targets. One uses a gun—and any weapon he can get his hands on; the other employs his intuition and the law. And in William Bernhardt’s spectacular thriller, as both move closer and closer to uncovering a world-shattering plot, the ultimate act of betrayal is launched from the heart of America’s capitol itself.

This is my 18th--and final--Ben Kincaid novel.  And that's a big deal to me, because Ben and I have been together for a long time.  So if we must part ways, I wanted to say goodbye with a big story, something worthy of the twenty-plus years I've spent with this character.  I hope you'll agree that Ben goes out in a blaze of glory with this story.  The naive young Oklahoma attorney of the first book, Primary Justice, takes on a case with national--even international--repercussions in his final adventure.

William Bernhardt is the author of more than twenty novels, including Primary Justice, Murder One, Criminal Intent, Death Row, Capitol Murder, Capitol Threat, Capitol Conspiracy, and Nemesis. He is one of fewer than a dozen recipients of the H. Louise Cobb Distinguished Author Award given “in recognition of an outstanding body of work in which we understand ourselves and American society at large.” He is also one of the country’s most popular writing instructors, teaching at various conferences throughout the year. A former trial attorney, Bernhardt has received several awards for his public service. He lives in Tulsa with his wife, Marcia, and their children.

Book Description Books on Tape 2010-10-01, 2010. Audio CD. Condition: Good. Item is in good condition. Some moderate creases and wear. This item may not come with CDs or additional parts including access codes for textbooks. Might be an ex-library copy and contain writing/highlighting. Seller Inventory # DS-0307876845-3